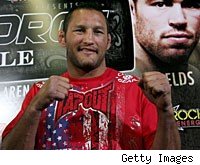 In the four years since the death of Pride, two of its champions, Fedor Emelianenko and Dan Henderson, have traveled long and winding roads through the MMA world. Now they're ready to fight each other for the first time on Saturday night in suburban Chicago, in a fight that isn't the mega-event a Fedor-Henderson once would have been, but is a fun fight for longtime fans atop a very good Strikeforce card.

What: Strikeforce: Fedor vs. Henderson

When: Saturday, the Showtime main card starts at 10 p.m. ET.

Fedor Emelianenko vs. Dan Henderson
Although the 40-year-old Henderson is six years older than Fedor, I think the biggest question about this fight is how much Fedor really has left. We know what kind of fighter Henderson is at this point in his career -- not as great as he was in his Pride heyday, but still plenty good -- but we're not sure what to make of Fedor: Are his back-to-back losses to Fabricio Werdum and Antonio Silva a sign that he just doesn't have it anymore? Or did he just fall victim to a great Brazilian jiu jitsu practitioner in Werdum and then get overpowered by a much bigger fighter in Silva?
I tend to think it's somewhere in the middle: Fedor is certainly not the best in the world anymore, but the losses to Werdum and Silva don't necessarily mean much for his fight with Henderson.
So how does this fight play out? There are a few paths to victory I could see for Henderson. I could see Henderson hurting Fedor with a big right hand, and I could also see him taking Fedor down and putting him on his back. I don't know if Henderson has much of a chance of finishing Fedor, but he could definitely win a decision.

But I think it's more likely that Fedor makes good use of his size advantage to land punches with more power and control Henderson on the ground as well. I see this fight going the distance, and Fedor doing enough to win a decision.
Pick: Fedor

Marloes Coenen vs. Miesha Tate
I love this stylistic matchup for the women's 135-pound title. Tate is a strong wrestler who can put Coenen on her back, but there are few fighters in all of MMA as good off their back as Coenen. I see this fight as very similar to Coenen's last title defense, against Liz Carmouche, in which Carmouche controlled most of the fight but Coenen eventually pulled off a triangle choke in the fourth round. In a three-round fight, I'd probably pick Tate to win a decision, but this is a five-round title fight, and I think that will give Coenen enough time to pull out a submission.
Pick: Coenen

Robbie Lawler vs. Tim Kennedy
Lawler is a heavy hitter and capable of knocking Kennedy out, but I just think Lawler's greatest liability as a fighter -- his submission defense, or lack thereof -- meshes too well with Kennedy's strengths as a grappler. Kennedy should be able to take this fight to the canvas and force Lawler to tap.
Pick: Kennedy

Paul Daley vs. Tyron Woodley
This matchup has a similar mix of styles to Lawler-Kennedy: Daley is a puncher with as much knockout power as anyone in the welterweight division in all of MMA, but he doesn't have much of a ground game, and his takedown defense is poor. Woodley is nowhere near the striker that Daley is, but Woodley was an excellent college wrestler at Missouri who is making real progress in turning into a complete MMA fighter. Daley is the toughest opponent Woodley has faced to date, and it's possible that he'll wilt when he feels Daley's heavy hands, but I think it's more likely that he'll take Daley down repeatedly and grind out a decision.
Pick: Woodley

Scott Smith vs. Tarec Saffiedine
Saffiedine and Smith are both a lot of fun to watch, but they're very different as fighters. And the biggest difference between them, to my mind, is age: Saffiedine is a 24-year-old who's still getting better after 13 pro fights. while Smith is a 32-year-old who's in decline after 26 pro fights. Smith has been knocked out in his last two bouts, and while I don't think Saffiedine has the striking acumen to make it three in a row, I do believe Saffiedine is a better fighter than Smith at this stage of his career and should beat him by decision.
Pick: Saffiedine