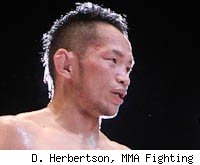 The event, which is expected to feature the opening round of DREAM's Bantamweight World GP, has only one fight at this stage. Two generations of Shooto champions will clash with Caol Uno and "Lion" Takeshi Inoue meeting in a featherweight attraction.

Caol Uno, a former Shooto welterweight (154 lbs) champion and two-time UFC title contender, will come into the bout on the heels of his impressive victory over slugger "Wicky" Akiyo Nishiura. The decision over Nishiura in May marked Uno's first victory since May 2008.

Although not officially announced, Sasahara also hinted that Satoru Kitaoka, former Pancrase and Sengoku champion, will also be making his promotional debut at DREAM.17.

DREAM.17 will be the first numbered event of the year for DREAM and will take place almost exactly one year after DREAM.16, which was held on Sept. 25, 2010 in Nagoya. Due to financial difficulties and the March 11 Japan earthquake, DREAM has only managed two down-scaled "Fight for Japan" events in 2011 until now.