Burt Watson Discusses His Role as UFC's 'Babysitter to the Stars' 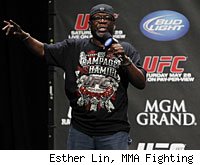 There's a reason why Burt Watson is referred to as "the babysitter to the stars" by commentator Joe Rogan.

Watson's job is to take care of the fighters in the days leading up to fight night and considering how much is on the line for the fight on any given night, Watson's position as the UFC site coordinator is something he takes very seriously.

"Stepping into that Octagon is one heck of a job, it's one heck of a thing to do and my main purpose or intention is to see that those guys have a complete comfort level, baby, when they step into that cage," Watson said Monday on The MMA Hour. "I mean, complete."

Watson says he handles for the fighters everything from tickets, making sure they have their mouthpiece/cups, meal money, transportation to the weigh-ins, a workout room at the hotel, anything that could potentially sidetrack a fighter.

"Fighters when they get ready to step in the cage, MMA or boxing, little things take them to the left or to the right," Watson explained. "Due to my experience in boxing and now MMA, I kind of realized the little things take them to the reason I became a coordinator is to bridge that gap between the promoter and the fighter and give that fighter what he needs to get that comfort level so he has nothing on his head that could take it to the left or the right."

His dedication to his work has also given him a taste of fame of sorts within the hardcore MMA fans. Popularity is not a usual perk for your average "babysitter," but when it comes to MMA, Watson, while appreciative, is not necessarily surprised.

Watson, who has been with the UFC since UFC 31 and has only missed two events (both times for his children's weddings), even has his own UFC catchphrase. During UFC events, Bruce Buffer has "It's time!" Mike Goldberg will yell, "It's all over!" For Watson, he has "We rollin'!" He explains it was something that came around four years ago out of the difficulty of physically running around backstage chasing after fighters to keep them on schedule.

"One day and I came down and my feet were hurting and I was just not ready to work and I started down the hall and I said, 'You know what? I'm not running no more. I'm not going to run in and out of the dressing rooms no more. I'm gonna stay down here in the hallway and yell.'"

And just like that, he's more than a familiar face in the UFC's pre-fight and fight night festivities, he's become a part of the overall UFC experience.