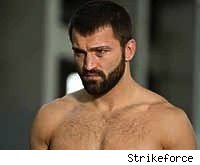 Two sources with knowledge of the situation confirmed the matchup, which will be officially announced in a Friday press conference.

The 15-9 Arlovski will be hoping to bounce back after a four-fight losing streak. He has not won since an October 2008 KO win over Roy Nelson. Since then, he's lost fights to Fedor Emelianenko, Brett Rogers, Antonio Silva and Sergei Kharitonov. Three of the four have come by way of KO or TKO, leading some critics to call for Arlovski to consider retirement.

Instead, he'll attempt to walk the comeback trail against Lopez, a Michigan-based fighter with a 5-2 record who is coming off a 75-second TKO win at a recent King of the Cage event. Lopez has won four of his last five overall. The 24-year-old also has experience in pro boxing, with a 3-4 record in seven fights.

He's fought primarily as a light-heavyweight in MMA but has weighed as much as 226.5 pounds during his boxing career. Arlovski, who entertained boxing aspirations before settling back into MMA, usually weighs around 240 pounds.