Jeff Curran Back in UFC, Expected to Face Scott Jorgensen in Return 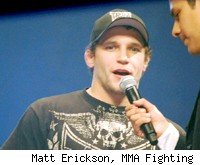 After a five-fight stint outside Zuffa, former WEC and UFC fighter Jeff Curran is once again back in the UFC.

Sources close to Curran's camp confirmed Tuesday to MMA Fighting that the fighter has signed a new deal with the UFC. Additionally, MMA Fighting has learned Curran's return is likely to be against former bantamweight title challenger Scott Jorgensen, though the precise event is not yet known. News of Curran's signing was first reported by MMA Junkie.

Curran (33-13-1, 0-1 UFC) has gone 4-1 since his release from the WEC after his last loss in August 2009, including a Strikeforce victory in November 2009. His other three wins have come as unanimous decisions in fights for his own promotion, XFO, which he runs out of his north suburban Chicago Team Curran school.

Curran first fought in the UFC in January 2004, dropping a unanimous decision to future welterweight champion Matt Serra in a lightweight fight. He then rattled off nine straight wins, including seven by submission, before losing at Pride Bushido 12 to Hatsu Hioki.

After five more wins, including one in the IFL, Curran signed with the WEC, with which he had one win early in his career at WEC 4. After a win at WEC 29, he got a crack at featherweight champ Urijah Faber, who submitted him in the second round.

After a loss to Mike Brown, who would go on to challenge Faber and win the featherweight title in his next fight, Curran dropped to bantamweight, where he lost to Joseph Benavidez and Takeya Mizugaki before the WEC cut him loose on a four-fight skid. All four losses came to WEC champs or fellow one-time title challengers.

Sources close to Curran's camp told MMA Fighting that the Brazilian jiu-jitsu black belt was told upon his release from the WEC that if he put together a good run outside the promotion, he could be welcomed back. Though Curran has fought at lightweight, featherweight and bantamweight in his career, it is the UFC's bantamweight waters he will test.

Though his wins outside of Zuffa have been fairly low-profile, he has helped coach his cousin, Pat Curran, to Bellator's Season 2 lightweight tournament title. Other notables at the Curran Martial Arts Academy include former UFC lightweight champ Jens Pulver and UFC fighters Bart Palaszewski and Mackens Semerzier.

Jorgensen (12-4, 1-0 UFC) won his UFC debut in June with a knockout of Ken Stone at the TUF 13 Finale. In that fight, Jorgensen was being handled by Stone with relative ease in the standup game. But when Jorgensen got the fight to the ground, he was able to land a rare knockout punch from Stone's guard. At the final WEC event last December, Jorgensen dropped a unanimous decision to bantamweight champ Dominick Cruz, which snapped his five-fight WEC winning streak.