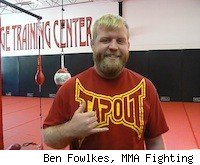 WHEAT RIDGE, Colo. -- When Justin Wren says that God told him to take a break from fighting and go to one of Africa's most dangerous war-torn nations with three other Christian missionaries, he knows how that's likely to come off.

"I hope I don't sound like a religious dude," Wren says, flashing an embarrassed grin from deep within his bushy blonde beard. "That used to be like a cuss word to me."

That was before, back when Wren was not only a non-believer, but openly hostile to religion. If you'd told him a year and a half ago that he'd be putting his MMA career on hold to travel the earth with a small band of hardcore Christians, he'd have asked you what you were smoking, and whether you could spare any. He didn't even want to attend a church service, much less rearrange his life altogether.

And yet, here he is, packing his bags for the Democratic Republic of the Congo and laughing politely when his old teammates at the Grudge Training Center joke about the very real dangers that await him there.

"What do you want us to do if you don't come back?" says fellow heavyweight Brendan Schaub.

Wren shrugs. It's the kind of joke that's only funny until you start thinking about it.

Beginning in August, Wren and three other members of the Unusual Soldiers missionary group plan to travel to the Congo for a month, where they'll bring aid and hope to the long-suffering local Pygmy tribes who have been victims of murder, rape, and even cannibalism, according to many sources. It's a region torn apart by civil war, and by all accounts it's the Pygmies who have gotten the worst of it.

"It sounds like they're living in hell on earth," Wren says. "And that needs to change."

As for what might become of Westerners attempting to come to their aid, he tries not to dwell on the negatives.

"Am I worried?" he says. "If I think about it too much, maybe. But really I'm not. I feel like I was called to go there."

And yes, he realizes how that must sound to most people. He also knows where he was before Christianity changed his life, and he's in no hurry to go back there.

Most fight fans probably know Wren as the gregarious character from season ten of The Ultimate Fighter. Maybe they remember his narrow decision loss to eventual season winner Roy Nelson, or his split decision defeat against Jon Madsen in the show's finale event. What they don't know is that, despite appearances to the contrary, Wren's life was a mess back then. Even after relocating to Denver after the show and going on a three-fight win streak outside the UFC, Wren was as lost as ever, and headed for disaster.

"I was drinking, depressed, using drugs. I was an alcoholic and I was suicidal, so I wasn't too pleasant to be around. It's not that I was ever a bad guy to any of these guys," he says, gesturing to a gym full of old friends and training partners. "But this team is like a family, and I couldn't really be a part of it because I was in a deep, dark place."

The talent and potential that coach Trevor Wittman saw in Wren during the filming of the show soon gave way to a less pleasant reality once it was over. Wren was inconsistent in training, regularly missed practices, and was voted off the Grudge team by his peers. Only a veto by Wittman, who wanted to give him once more chance, kept him on the squad.

"I loved Justin when he was on the show, because there he had to come to practice," Wittman explains. Once he had other options, things changed radically.

But Wren's depression didn't stem from a floundering career. He'd missed his initial shot at the UFC, but he was still in his early twenties and he was finding great success on the smaller circuit. It should have been enough to make him happy, Wren thought. The fact that it didn't only threw him further into despair.

"I wanted to fight in the UFC since I was 13 years old," says Wren, now 24. "I never wanted to do anything else. My middle school papers on what I wanted to be when I grew up were all about being a UFC fighter. My teachers would come back and say, 'Oh no, you don't. I didn't know what that was, but I looked it up and you don't want to do it.' But I knew I did.

"That was all my identity was, was being a fighter, being in the UFC. I started fighting at 19, got on The Ultimate Fighter, and I felt like I was going towards my dreams. But for some reason I still had this void. Fighting wasn't filling it up, so I turned to drinking, which temporarily hid it. But that wasn't doing enough, so I turned to drugs. That wasn't enough either, so I got real depressed, suicidal."

Three weeks before he was due to main event a card at the Hard Rock in Las Vegas, a youth pastor who was a friend of the family invited him to a men's retreat after hearing that Wren was struggling.

"I told him, no offense, but I didn't think sitting around a campfire with a bunch of Christians singing kumbaya was going to do anything for me," he says. The pastor was tenacious, and eventually Wren gave in.

"It radically changed everything," he says.

He went on to win that fight and another a month later in Biloxi, Mississippi, where he injured his back and got his head split open from a strike. Sitting in the emergency room that night, Wren decided that he needed to change his life.

"I didn't want to be a hypocrite or a phony. I hated that so much about Christians, so I never wanted to be that. A quote I heard said, people will doubt what you say, but not what you do. I didn't really know what that meant, but then I went to Haiti with Caleb."

Caleb Bislow is the founder and leader of Unusual Soldiers, which prides itself on taking a Christian message to the world's "dark, dangerous, and despised places." Wren traveled with him to the earthquake-devastated nation of Haiti, and to the Dominican Republic. It didn't take Bislow long to see that in Wren, he had something special.

"I knew of his background as a fighter that he was a risk-taker, but what I didn't know was whether he was humble," Bislow says.

On a survival training retreat, Wren proved his mettle and more. The trip to Haiti and the Dominican Republic proved to be an eye-opener for Wren, as he saw the horrible conditions people were living in, and felt dwarfed by how little one person could do to help them.

"In Haiti, there was trash as tall as me for as far as you could see on the streets. People would climb down these ridges made of trash to bathe in this dirty water, and then climb back out through knee-deep trash to get out. It's just brutal."

In the Dominican Republic, he formed a bond with an old woman and her nine-year-old granddaughter, who had been abandoned by the rest of her family due to her severe mental and physical handicaps. While famous fighters could "impress from a distance," Wren says, this felt like a rare opportunity to actually help someone up close.

"I mean, I don't think that impacted the world, but it definitely impacted those people," he says.

But helping with disaster relief in Haiti is one thing; journeying into the center of Africa with just three other men seems far more dangerous. Bislow says he likes to keep the groups small enough to "all fit into one vehicle," but they all know the trip comes with some risk.

Wren could just as easily stay home and rededicate himself to his fighting career, and he'd probably face nothing more severe than a concussion or a broken nose. And according to his former coaches and teammates, he has the talent. It probably wouldn't take long before he'd get another shot in the UFC, his childhood dream.

But as crazy as this sounds, and as much of a "religious dude" as he may appear to be to others, he's not about to be talked out of it. At least now, he says, he no longer feels that void.