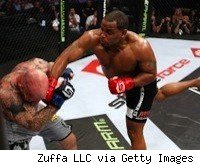 In the end, the Strikeforce Grand Prix will probably be remembered as a good idea, badly executed. Due to some terrible luck, some unforeseen developments and some questionable decisions, the heavyweight tournament has played out in a way that could not have been predicted by anyone, including the organizers who will ultimately share some of the blame. Yet, Strikeforce is left to go through the motions and complete the brackets, with little hope of achieving its original goal: crowning a winner that could be seen as a true rival to the world's No. 1.

With three matches still to come, it's certainly possible that the remaining fights could result in high-quality MMA, but the winner is unlikely to challenge the UFC champion for bragging rights. With the three biggest names and highest-ranked fighters out, what is the next best outcome for Strikeforce? How about the birth of a new star?

When Strikeforce and Showtime drew up the bracketing for the tournament, they did something quite interesting. They stacked one side with their top three heavyweights: Fedor Emelianenko, Fabricio Werdum and organizational champion Alistair Overeem.

At the time, it seemed like a questionable decision, one that ensured that the tournament final would include one of the three at best, and no marquee matchup. But Scott Coker's reasoning was more about the immediate future. He wanted to ensure that at least one and possibly two matchups with combinations of the three would occur. As it turns out, we only got to see one: Werdum vs. Overeem, and it turned out to be something of a dud.

Coker's best-laid plans went even further south within the last week, when it was confirmed that Overeem was out of the tournament and replaced with Daniel Cormier. Amazingly, Strikeforce stacked one side of the bracket with three of its best fighters, and not a single one will compete in the next round.

Just as surprisingly, Cormier -- who was not even considered an alternate possibility at the start of the tourney -- was in.

On the Grand Prix kickoff date of Feb. 12, there were 14 fighters with dreams of capturing the tournament. Aside from the aforementioned big three, there were other field entrants Josh Barnett, Brett Rogers, Sergei Kharitonov, Andrei Arlovski and Antonio Silva. There were also three fights that could produce an alternate in case one was necessary: Shane Del Rosario vs. Lavar Johnson, Valentijn Overeem vs. Ray Sefo and Chad Griggs vs. Gian Villante.

Strikeforce isn't known for its deep roster, and even though heavyweight is probably its best weight class, the fact that Cormier wasn't included was surprising. So why was he suddenly inserted into the field as a replacement for Overeem? Who knows? We've never gotten a straight answer, but to be fair, Del Rosario has since been injured in a car accident, and Valentijn Overeem lost a fight, so they would be ruled out. There's no known reason keeping Griggs out though. We also have to keep in mind that while Coker and Showtime were running the show at the start of the tourney, the Zuffa brass has a major say in things these days.

That said, there were 14 possibilities, and he wasn't one of them, yet here he is. The undefeated Cormier has an incredible story that is an easy sell. By now, most fans know that Cormier was a two-time wrestling Olympian who's transitioned to MMA. But he also has a captivating personal story. When he was seven years old, his father was shot and killed. In 2003, his three-month old daughter Kaedyn died in a car accident.

Despite the heartbreaks, Cormier is an engaging and positive person who has taken a leadership role in the veteran-heavy American Kickboxing Academy camp.

He's also the only fresh face out of the remaining Grand Prix quartet. Barnett, now considered the favorite to win, has been fighting since 1997 and has had well-documented issues with performance-enhancing drugs that have somewhat tainted his reputation. Silva is an intimidating presence, and his win over Emelianenko was impressive, but he also once tested positive for steroids. Thirty-year-old Kharitonov is actually younger than Cormier, but he's been involved in the major MMA scene since 2003.

If Cormier can manage to work his way through the bracket and win, Strikeforce could have a new star on their hands, something they badly need after all the recent madness.

That's four of their seven champions who are either gone from the promotion or in contract limbo, and three of their most popular fighters in various states of unavailability.

While there are some talented young fighters like Tyron Woodley, Lorenz Larkin and Amanda Nunes on the way up, Strikeforce doesn't have the depth to absorb the loss of big names. As of now, Cormier is not a big name, but he has the pedigree and charisma to become one with the right platform. It could be the heavyweight GP. It started out with the idea of showcasing Strikeforce's best division and proving their best heayvweight the equal of the UFC's best. That's unlikely to happen now. Plans B and C went out the window, too. The worst possible result now is the expected happening. An anti-climactic ending will ensure it as a promotional bust. The best possible result is the unexpected. Cormier's not supposed to be here, and he's not supposed to win.

Strikeforce doesn't need any more controversy. What they need now is a feel-good story, like an alternate receiving an opportunity and cashing it in. It's not how anyone drew it up on the brackets back in February, but this run of bad luck has to end sometime. Maybe it should end with someone who has suffered through his own bad luck and turned a sad story into something uplifting.