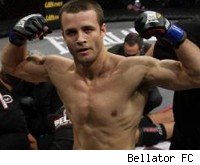 Bellator 47 this past Saturday pulled in an average of 277,000 viewers, making it the second most-watched Bellator event on MTV 2, the cable network said Tuesday.

A total of five fights aired during the telecast, four of which were live. In co-headlining bouts, Curran and Marlon Sandro defeated Mann and Nazareno Malegarie, respectively, to advance to the finals of the Bellator Summer Series Featherweight Tournament. Curran and Sandro now have a date to meet at Bellator 48 on Aug. 20 to determine who receives the next title shot against champ Joe Warren.

Also on the televised card was Chris Horodecki turning in a dominant performance against Chris Saunders with better striking and successful takedowns. In the opener, Neil Grove stopped Zak Jensen in a wild slugfest highlighted by the two trading punches as Grove was attempting a footlock. The lone taped preliminary bout that aired on MTV 2 had Alexandre Bezerra putting Jesse Gross to sleep with a rear-naked choke.

The highest rated Bellator event remains Bellator 44 on May 14 with 325,000 average viewers. The event showcased middleweight champion Hector Lombard dispatching veteran Falaniko Vitale with a powerful right hand in the third round.