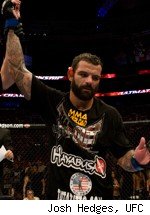 Alessio Sakara released a statement Tuesday morning explaining the knee injury that forced him to pull out of his UFC 133 fight against Jorge Rivera less than two weeks before the fight.

"I tried to ignore the pain until now, thinking I had just sprained the knee," he said. "I kept training without using my legs. I wanted to get to the fight in a good condition somehow, but the MRI diagnosed that I broke my ligaments, and now I can't fight!

"I apologize to all my supporters. Please remember that I am a fighter and that I want to fight for all my life. But now, I must wait until I am fully healed before I can fight again. I hope you all understand."

This marks the third time in a row that a scheduled fight between Sakara and Rivera has been canceled.

First, a proposed UFC 118 fight was scrapped after Rivera pulled out due to a broken arm. Then Sakara was forced to withdraw just hours before their UFC 122bout after succumbing to flu-like symptoms. And on Monday, Rivera informed The MMA Hour audience that a Sakara knee injury had once again called off the fight.

"I thought it was a joke," Rivera said. "I couldn't believe it."

As a result, Rivera will now face Costantinos Philippou on the UFC 133 pay-per-view card.

Sakara (15-8, 1 NC) is coming off a loss to Chris Weidman in March. Prior to that defeat, the 29-year-old Italian had won three in a row. No word on how long he will be sidelined for due to the knee injury.

UFC 133, headlined by Rashad Evans vs. Tito Ortiz, airs live on pay-per-view on Aug. 6 from Wells Fargo Center in Philadelphia.