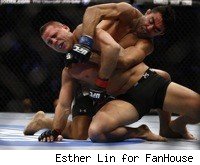 Rafael Natal will remain on the UFC 133 card after all, and his new opponent will be former TUF cast member Paul Bradley, according to sources close to the event.

Hours after Alessio Sakara's injury forced the UFC to -- once again -- shuffle the card, the organization decided to match up Natal's original opponent, Constantinos Philippou, against Jorge Rivera and signed Bradley to fight "Sapo."

Bradley (16-2, 1 NC) has won his last three in a row while bouncing around different organizations. He lost to Strikeforce middleweight contender Luke Rockhold on a Challengers show last February.

A cast member of the seventh season of The Ultimate Fighter, Bradley had to leave the show early after suffering from a breakout of Herpes Gladiatorum, which was an infectious rash on his neck.