B.J. Penn Critical of Expanding TRT Use: 'The Needle Is Not the Answer' 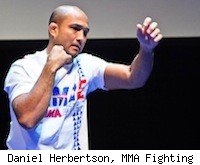 B.J. Penn has never been afraid to speak his mind, even if it has gotten him into hot water in the past. Following the recent situation surrounding Nate Marquardt and his testosterone replacement therapy (TRT) issues, Penn was one of the few fighters to criticize what seems to be a growing practice in the MMA world.

On Monday's edition of The MMA Hour, Penn elaborated on his thoughts regarding TRT and how it is quickly seeping into the sport, saying the Marquardt case served as an education for him. Penn said he took personal interest in the case because as he revealed, he was probably going to fight the winner of Marquardt's proposed match with Rick Story, a bout that never happened after Marquardt's testosterone to epitestosterone ratio didn't return to normal levels in time to be granted a therapeutic usage exemption.

"I think everyone is really of the same opinion as I am, if they want to admit it or not," he said. "Stuff like this is not easy to talk about. We're talking about friends and colleagues of mine. They look at me and they hear me say these things, and they're like, 'You know you're the only guy that doesn't do it, right?' And I'm like, I know.


"It's a catch-22 for me," he continued. "I believe so strongly in fair play and all these things, and on the other side, it's people you know and people you look up to, legends of the sport. They've been involved with stuff like that. I guess i shouldn't be so outspoken because I have so many friends and colleagues and so many people I respect in this sport that have gotten involved with stuff like TRT and hormone replacement."

Penn criticized TRT usage as the easy way out of problems associated with training. He said that he's often faced issues in his camp related to overtraining when his body was exhausted and out of whack.

"Peaking" is an athletic phenomenon that is part science, part trial-and-error, in which athletes manipulate their training cycle in an effort to have their body performing at maximum levels at game time (or fight time). There are potential problems with the process, however, and mistiming your peak can be the difference between winning and losing. Overtraining, meanwhile, can lead to lower testosterone levels. While some fighters are getting that addressed with TRT, Penn believes it can simply be an unfortunate side effect of the process. As such, he's from the old school that fights through it.

"When you're chi is down, you feel weak, and I'm sure it's an easy way out to do all the testosterone and stuff, but I just couldn't see myself doing it," he said.

Asked how prevalent he thinks the process is, he says he doesn't ask around, but after being in the sport for 10 years, he says he knows that boosting testosterone levels is quite common. The surprising part to him was learning how easy it is to do now, and he also added that many people, including well-known coaches in the sport, have talked to him about trying one of the treatments to boost his own performance.

Penn heads back to the cage at UFC 137 in October. Though a rematch with Jon Fitch was expected, Fitch's shoulder injury would have him sidelined past that date, and the UFC moved on, pairing Penn with the surging Carlos Condit, who has won 12 of his last 13.

Penn says he had no preference of opponent but acknowledged that after Fitch was ruled out, a fight with Condit made sense. He believes with two or three more wins, he could gain another welterweight championship match, but he also harbors hopes of returning to the lightweight division again in the future.

That's a far cry from how he felt in late February after fighting Fitch to a draw. Afterward, he contemplated retirement, but now he says that's far from his mind.

"I think I was just in a down moment right there," he said. "I believe in my heart I could beat Jon Fitch, and I was just kind of embarrassed at how the fight ended up. Maybe I was just thinking some negative thoughts at the time. I'd love to come in and fight all the best guys and do something in the welterweight division."