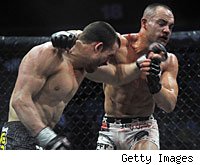 Where: Casino Rama, located on the reserve land of Chippewas of Rama First Nation

When: Saturday, the MTV2 televised card begins at 9 PM ET

Pat Curran vs. Ronnie Mann
Curran, who won Bellator's lightweight tournament last year, looked great in his featherweight debut last month against Luis Palomino, and he'll have a significant size and strength advantage over Mann. Curran has one-punch knockout power and is a good wrestler, and he's definitely a threat to overwhelm a smaller opponent like Mann.

But what Mann lacks in size and power he more than makes up for in technique. Early in his career, Mann submitted most of his opponents, but more recently he has become a more effective striker. I think Mann keeps this fight standing and wins a decision.
Pick: Mann

Marlon Sandro vs. Nazareno Malegarie
This is one of the best featherweight fights of the year in MMA. Sandro is both a Top 10 featherweight and one of the most exciting fighters in the sport, but Malegarie is 20-1 in his career and is a threat to finish anyone on the ground. Malegarie employs an attacking style of Brazilian jiu jitsu, and is much more interested in pulling off submissions than he is in simply gaining advantageous positions, and that makes him a pleasure to watch.

So Sandro will have his hands full, especially if Malegarie is able to get the fight to the ground. But I think Sandro will prove to be too much for Malegarie. In four of Sandro's last seven fights, he has knocked his opponent cold with punches, and Malegarie has never faced anyone with even close to the striking power that Sandro possesses.
Pick: Sandro

Now Grove is back with Bellator in another heavyweight fight that looks like it should be exciting. Grove is a power puncher who usually wins by first-round knockout or TKO, and win or lose, Jensen's fights usually end quickly: In 17 pro fights (including one while he was a cast member on The Ultimate Fighter), Jensen has only gone past the first round once.

Chris Horodecki vs. Chris Saunders
It's hard to believe Horodecki is still only 23 years old, because we've been hearing him touted as one of the rising stars of MMA for four or five years. Horodecki was a young sensation in the now-defunct International Fight League, building up an 11-0 record before he turned 20. In hindsight he may have been pushed too hard, too fast, as his career started to falter: Horodecki went just 2-2 in the WEC in 2009 and 2010 and was released from the promotion before the UFC absorbed the WEC.

Bellator is a great place for Horodecki to get his career back on track: He could use a little time in a smaller promotion to regroup before trying to make another run at the UFC. Saunders, who's 9-1 in his professional MMA career, is a solid opponent whose striking is good enough that he could knock Horodecki out, but I think Horodecki controls this fight and wins a unanimous decision.
Pick: Horodecki