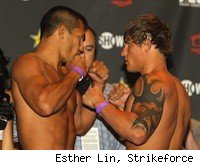 The last match of the trilogy is set to go off Friday night from The Pearl at The Palms in Las Vegas after main-event fighters Bobby Voelker and Roger Bowling both made weight for the deciding match of their series.

Both Voelker and Bowling came in officially at 171 pounds for their welterweight tilt.

Voelker comes in with the momentum of a win in the last fight between the two, finishing Bowling in a second-round TKO last October. The loss was the first of Bowling's career.

Prior to that, Voelker (23-8) suffered a loss in a controversial technical decision after Bowling couldn't continue following an unintentional eyepoke.

Since dropping the fight to Voelker, Bowling (10-1) returned to action with a decision win over Josh Thornburg in March.

All 18 fighters involved on the card made weight for the event.

In a key women's match that could determine the next contender for the welterweight championship, both Liz Carmouche and Sarah Kaufman came in at 135 pounds even.