Nunes vs. Gamburyan, Mizugaki vs. Escovedo Added to UFC 135 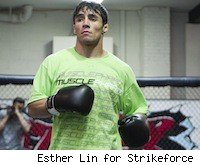 UFC continues to add to the quickly filling UFC 135 event for September, announcing a pair of lighter-weight clashes to the Mile High City event.

The first addition is a featherweight scrap pitting Diego Nunes against Manny Gamburyan.

Nunes is fresh off a UFC 131 loss to Kenny Florian, a close defeat in which he impressed many observers. The setback was only the second defeat of his career, as he fell to 16-2.

Gamburyan, meanwhile, will be attempting to snap a two-fight losing streak. In his most recent fight -- his UFC debut -- he lost a majority decision to Tyson Griffin in a tight bout. Prior to that, he was knocked out by Jose Aldo in a title fight at WEC 51.

In the other bout, Takeya Mizugaki will square off against Cole Escovedo in a bantamweight fight.

Mizugaki (14-6-2) dropped his last fight, a unanimous decision loss to Brian Bowles at UFC 132. He's alternated losses and wins in his last seven fights. Escovedo will be searching for his first UFC win after losing in his debut to Renan Barao via decision. Escovedo -- a former WEC featherweight champion -- is 17-7 overall.