Michihiro Omigawa Gets Another Fight: Jason Young at UFC 138 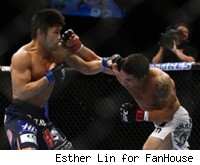 Fighters who go 0-4 in the UFC don't often get a fifth shot in the Octagon, but Michihiro Omigawa will.

Omigawa, the featherweight who went on a tear in Japan in 2009 and 2010 but has been much less successful in the UFC, is set to take on Jason Young at UFC 138 on November 5 in Birmingham, England. The fight was first reported by Fighters Only and later confirmed by the UFC's UK Twitter account.

But after returning home to Japan and signing with Sengoku in 2009, Omigawa looked like a completely different fighter: He went 8-1 over an 18-month stretch and earned recognition as one of the best featherweights in the world.

And then Omigawa returned to the UFC and struggled again. Chad Mendes out-wrestled him for 15 minutes en route to an easy unanimous decision win at UFC 126 in February, and Darren Elkins beat him by unanimous decision at UFC 131 in June. The decision with Elkins was controversial, however, and that may be why the UFC has decided to give Omigawa one more shot.

The British Young will have the home crowd on his side at UFC 138, and if he wins it will be the biggest victory of his young career. And if Young wins, it likely spells the end of Omigawa in the Octagon.