Michael Johnson vs. Paul Sass Set for UFC on Versus 6 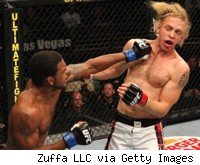 The Ultimate Fighter 12 lightweight runner-up Michael Johnson will make his third trip inside the Octagon when he meets British youngster Paul Sass at UFC on Versus 6, the UFC announced Thursday on its UK Twitter.

The UFC Live event is expected to take place Oct. 1 at the Verizon Center in Washington D.C.

Despite being Georges St. Pierre's first pick, Johnson (9-5) fell short of becoming "The Ultimate Fighter" in the finals last December against Jonathan Brookins. Johnson then returned last month, stopping Edward Faaloloto in the first round with punches at UFC on Versus 4.

The undefeated 22-year-old Sass (11-0) has not competed since his UFC debut last October at UFC 120 against Mark Holst. The contest earned Sass Submission of the Night honors with an impressive triangle choke, dubbed the "Sassangle," to his displeasure.

Charlie Brenneman vs. Anthony Johnson and Mac Danzig vs. Matt Wiman are two other bouts currently slated for the card.