T. Jay Thompson Wants the Next Big Deal for ProElite 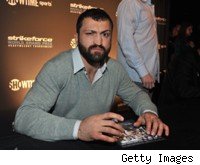 T. Jay Thompson powerlessly saw first hand how overspending and poor decision-making ultimately led to the demise of the original ProElite. Now, with the company under new ownership, Thompson has been given a much larger role this time around.

As VP of Fight Operations, Thompson is looking to build the promoting arm of ProElite slowly into a financially viable business as he awaits for the next big opportunity in the MMA landscape.

"My job with ProElite is put it in a position when an opportunity arises, we'll be able to capitalize on it," Thompson said Monday on The MMA Hour. "... Big name fighters, television contract."

If ProElite wants to even be in consideration for a deal, the company itself needs to be afloat to receive it.

"It looks like Bellator has a good shot at getting that next Spike TV deal," Thompson said. "Is this because they are a tremendous, unbelievable MMA show? I don't think so. I think they happened to be who's out there right now. They're the people that are in business. If it were six months from now, I think you'd be talking about ProElite having a deal like that."

Thompson, the former owner of the Hawaii-based ICON Sport, sold the fight promotion to ProElite in 2007. As he makes his return to MMA promoting, he'll be joining forces with a former promoting rival in Rich Chou. Chou is coming off a stint as the matchmaker for Strikeforce and has a long relationship with the Penn family.


Through Chou, ProElite already has an intriguing fighter under its roster. Reagan Penn, the younger brother of B.J., will make his MMA debut at ProElite's return event on Aug. 27 in Honolulu.

"Everyone I've talked to in Hawaii, outside of Hawaii that's trained, he's the better athlete of the family. B.J. will tell you the same thing. We have a tremendous amount of hope for him," Thompson said.

Also slated for the card so far are Andrei Arlovski, Kendall Grove and Joe Riggs.

While their return show will take place in Hawaii, it won't be the home base for running shows under the California-based ProElite. The reason why the Aug. 27 is taking place in Hawaii is a simple one.

"It's been awhile since I've promoted a show and it's nice to have that hometown advantage," Thompson said.

Thompson hopes the Aug. 27 card will be the beginning of a successful ProElite remake.

"People are rooting for us inside the industry," Thompson says. "People want a place to send their fighters. People want that kind of competing organization, so we've had no trouble putting what I think is a heck of a roster for our freshman effort and it'll only get better."