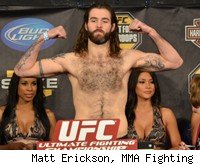 A pair of submission specialists will be looking for a tap in New Orleans, and it won't be one on Bourbon Street.

Lightweights Cody McKenzie and Vagner Rocha have made verbal agreements to meet at UFC Fight Night 25 in September. The promotion made the announcement at UFC.com on Wednesday morning.

In addition, the UFC recently added a welterweight bout between DaMarques Johnson and Clay Harvison to the card, which will be headlined by a welterweight scrap between Jake Shields and Jake Ellenberger.

McKenzie (12-1, 1-1 UFC), a cast member of Season 12 of "The Ultimate Fighter," saw his ridiculous streak of 11 straight choke submission victories end in January when he was, ironically, choked out by Yves Edwards. Prior to that, McKenzie had 12 stoppage wins, and 11 straight first-round choke submissions – 10 by way of a guillotine he has modified into what he calls the "McKenzietine."

McKenzie, an Alaska native, was a member of Georges St-Pierre's squad on TUF 12 and reached the quarterfinals before losing to Nam Phan. In his UFC debut at the TUF 12 Finale in December, he beat Aaron Wilkinson by guillotine to win his official UFC debut and Submission of the Night honors. He won a second straight bonus for Fight of the Night in his loss to Edwards at Fight for the Troops 2 in January. Since then, an injury forced him out of a UFC 130 fight with Bart Palaszewski.

Rocha (6-2, 0-1 UFC), a Bellator and Strikeforce veteran, made his UFC debut last month and was dominated in the standup game by Donald Cerrone en route to a unanimous decision loss. The Brazilian, who has a black belt in BJJ, fights out of Florida and will be looking to avoid his third loss in four fights. Four of his six career wins are by submission.

Johnson (12-9, 3-3 UFC), runner-up on TUF 9, is coming off a tough submission loss to Season 7 TUF winner Amir Sadollah at Fight Night 24 in March. Before that, he submitted Mike Guymon in January, sending "The Joker" into retirement. Johnson has yet to go the distance in the UFC – all three of his wins and all three of his losses have been by stoppage.

In Harvison (9-3, 1-0 UFC), Johnson gets another TUF veteran. Harvison, a member of Brock Lesnar's team on Season 13 this past spring, reached the quarterfinals, but lost to eventual runner-up Ramsey Nijem. At the TUF 13 Finale in June, Harvison won a split decision over fellow cast member Justin Edwards on the preliminary card. It was the first time the Georgia-based fighter had gone to a decision in his pro career.

UFC Fight Night 25, also known as "The Battle of the Bayou" as part of a promotion with major sponsor Bud Light, will be the UFC's first trip to New Orleans in the Zuffa era. The promotion's last trip to the Big Easy was UFC 27 in September 2000. UFC 16 and 18 also took place in the Louisiana city. The last time the UFC visited Louisiana was UFC 37, which took place just outside Shreveport in Bossier City.

In addition to the fight between Shields and Ellenberger, a matchup that was first reported by MMA Fighting last month, Fight Night 25, which will air live on Spike TV, will feature many other TUF veterans, including Court McGee vs. Dongi Yang and Jonathan Brookins vs. Erik Koch, plus a middleweight bout between Alan Belcher and Jason MacDonald.