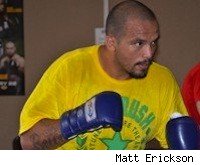 Fresh off snapping his two-fight losing streak with a win at UFC 131, Joey Beltran will go for two in a row when he takes on UFC newcomer Stipe Miocic at UFC 136.

The promotion confirmed the fight's booking on Wednesday.

The aggressive Beltran had dropped consecutive decisions to Pat Barry and Matt Mitrione before rebounding with a third-round TKO over Aaron Rosa in June. The victory made Beltran 13-5 overall and 3-2 in the UFC.

Miocic is thought by many to be an excellent prospect, with a background in wrestling from his days as an NCAA Division I competitor, as well as a boxing background as a Golden Gloves fighter.

The 6-foot-4, 240-pounder is unbeaten in six pro fights, with all six wins coming via finish (five knockouts, one submission).

UFC 136 will take place on October 8 from the Toyota Center in Houston.