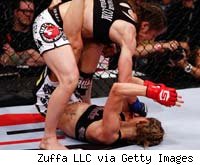 When Liz Carmouche first walked into the San Diego Combat Academy, she wasn't sure how the team would take having a lesbian training partner. MMA seemed like a man's world, and maybe not the most accepting one for women in general. For a homosexual woman like herself, Carmouche thought, the reception would only be colder.

But after five years in the Marines under the Don't Ask, Don't Tell policy, Carmouche had decided that she was done lying about who she was.

"After having to keep that aspect of my life secret while I was in the military, I realized that it wasn't the person I wanted to be," Carmouche said. "I wanted to be open and honest about it and take the risk rather than hiding it."

But as it turned out, her teammates were more accepting than she thought, and a whole lot less surprised to hear the news.

"It's pretty funny, because it was obvious to all of us, I think," chuckled Carmouche's coach, Manny Hernandez. But that wasn't what stood out to him the most. Instead, he noticed her strength, her athleticism, and above all else, her willingness to take a beating and eagerness to give it right back, even after she got her nose bloodied and smashed in her first sparring session.

And in the world of the gym, that meant much more to her training partners than her sexual preference. Her fighting ability and work ethic trumped everything else, and no one seemed to care who she shared her bed with at night. For Carmouche, this was a welcome revelation.

"I thought, of all things, a male-dominated sport and a sport where you're engaging in this physical combat, that I was definitely going to come across that. I thought I'd come into contact with some stereotypical person who's anti-homosexuality, whether it be men or women. But I found the opposite. All they care about is a good, quality person who's a good training partner. Apart from that, what you do with your personal life, they really don't care."


But as much as Carmouche loves MMA now, there was a time when she couldn't stand it. The first time she saw a video of a fight, during her second tour in Iraq, she was appalled by the violence and the blood.

"Somebody showed me a fight where somebody had gotten cut on the forehead and was just gushing blood and kept going throughout the fight," she said. "I couldn't grasp the concept that anybody would want to do that. I thought this was sanctioned street fighting."

The more she looked into it, however, the more she found that something about unarmed combat appealed to her, for very similar reasons that the Marines had: it was a challenge. It was a chance to test herself, to get stronger, and to improve her overall conditioning.

At least, that's how it started, as some glorified workout routine.

"The first time I got to really hit somebody in the face, that changed everything," she said.

It wasn't long before she was training with the pros on Team Hurricane Awesome -- a name Hernandez said they at first jokingly came up with after fighting in Mexico, where "all the team names are just ridiculous."

Carmouche learned quickly and developed as a fighter in no time, Hernandez said, but she was also a little too intense for some.

"We had a few more females in the beginning, but they pretty much all decided it wasn't for them once Liz joined," he laughed. "She cut our membership in half, pretty much. It definitely drew a line in the sand as far as who were hobbyists and who was serious about competing."

Now she trains almost exclusively with men, and even some of them have been forced to ask themselves some tough questions after catching a beating from Carmouche, Hernandez said. Down at the gym, these are the kinds of stories that are funny for everyone except the male victim involved. Like the one about the guy who got a concussion at the hands of Carmouche, then stumbled into the bathroom and threw up all over himself while sitting on the toilet.

"At our school we look at it like, she's an athlete," Hernandez said. "She can definitely f--k you up. That is something that happens. There are male fighters in the lighter weight classes who will high-tail it out of here, because they didn't sign up to get beat up by a chick. But it happens."

Carmouche bypassed amateur MMA and went straight into the pros, in part because, according to Hernandez, they couldn't find any other amateurs willing to fight her.

"People would get a look at her and they wouldn't want any part of it," he said.

In her first six months of pro competition, Carmouche rattled off five straight wins. Still, when she got the offer to step in on short notice against Strikeforce 135-pound women's champion Marloes Coenen back in March, even Carmouche was caught by surprise.

She'd been fighting for about a year, while Coenen had more than a decade in the sport and more than four times as many fights as Carmouche. She got the call as she was just sitting down to dinner, and the offer was hard to process at first, for a couple of reasons.

"I was training like I do year-round, but I didn't have a fight coming up so I thought, you know, I'm going to enjoy a nice meal. I made some potatoes, some chicken with some actual seasoning on it, and I think I even baked a cheesecake. As I was sitting there, I got the phone call asking, 'What would you think about taking a shot at the title?' ...Then it was like, well, I guess I'm not going to get to eat this."

For three-plus rounds the little-known Carmouche took it to the champion, taking her down and battering her with punches until it looked like the referee would have no choice but to stop it. Coenen did just enough to survive, however, and in the fourth round locked up a triangle choke off her back, trapping Carmouche and forcing her to tap out after coming painfully close to what would have likely been the biggest upset in the history of women's MMA.

"I felt too confident," Carmouche said, looking back on the first loss of her career. "I thought there was no way she was going to be able to get the triangle on, and on top of that I accidentally walked into the choke rather than out of it. That little mistake cost me. Up until that point, I was winning. But that mistake was worth losing. I'd rather take that chance and lose to someone who's the best in the world than beat someone nobody has ever heard of."

Nothing stings quite like coming so close and still going home empty-handed, but at least the fight put her on the map even in defeat. Suddenly people knew Carmouche's name and knew what she could do.

The downside was, once she'd proven herself against the champion, she knew there was no going back to the lesser-known, similarly inexperienced opponents she'd built up her record against in the beginning. That much became clear when she got her next fight offer -- a three-rounder with former champ Sarah Kaufman at this Friday night's Strikeforce Challengers event in Las Vegas.

In Kaufman, Carmouche faces an opponent much like herself. One who pushes the pace and is "super-scary," according to Hernandez. She's also an experienced pro with five years in the sport and a 13-1 record, so it's not as if Carmouche is getting much of a step down in competition. But as Hernandez explained, that's nothing new for Carmouche.

"She's f--king amazing," he said. "She's fighting guys who have two or three times her experience, and doing well."

Perhaps the most surprising thing about Carmouche's story, however, is how little attention it's gotten. Now that the UFC and Strikeforce are both under the Zuffa banner, she's the first openly gay fighter to compete for the world's largest MMA organization.

If she were a male fighter, that would be headline news, and it would probably be met with more of a mixed reaction. But in Carmouche's case -- and much to her relief -- it seems less remarkable than how far she's come as a fighter in such a short period of time. And for that, Carmouche said, she might have the peculiar mindset of the male-dominated sport to thank.

"When they look at two women, it's 'lesbian action,'" she said. "That's attractive to them. Two men doesn't have that same appeal to them. Two women is just much more appealing to them, because they find it attractive."

It's a depressingly simple explanation if you're one of the sport's male fans, but maybe an accurate one. Regardless, the open and honest life Carmouche is able to live as a lesbian MMA fighter still stands in stark contrast to the one she lived as a gay Marine under Don't Ask, Don't Tell, she said.

"It was really difficult. I wouldn't say I came out so much as I came into my own. I really discovered what my sexuality meant to me and what that meant to me as a person. I was able to come out to my family, but other than that I couldn't come out to co-workers or to friends because of what that would mean for my military life and my career. That made my life difficult, because I felt like I was constantly conflicted and at war with myself every day that I faced people."

In her new life as a pro fighter, and with the support of her team behind her, that's one problem she no longer faces. Now all she has to worry about is the woman standing across the cage from her on Friday night -- and in Kaufman, she faces one who likes hurting people and mixing it up just as much as she does.

Just as it was when Carmouche first stepped on the mats, that's the great equalizer. It's the blind fairness of sport, the only thing that matters when the cage door finally swings shut. And that's exactly the way Carmouche wants it, even if she never expected to find it here.