Alves vs. Abedi, Pickett vs. Barao Added to UFC 138 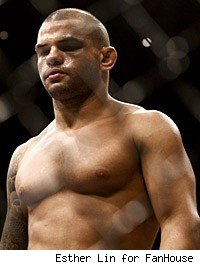 Two more fights have been added to UFC 138, which was officially announced Tuesday for Nov. 5 in Birmingham, England.

England's Brad Pickett will meet Renan Barao in a bantamweight fight, according to The Daily Telegraph, while Thiago Alves will welcome newcomer Papy Abedi in welterweight action, according to the UFC's UK Twitter account.

Alves (18-8) will look to bounce back from his most recent loss to Rick Story at UFC 130. The former welterweight title contender has lost three of his last four fights.

The 33-year-old Abedi, who holds black belt in judo, enters his Octagon debut with a perfect 8-0 record, finishing all bout one of his opponents. Since making his MMA debut in 2006, the native of the Democratic Republic of the Congo, has fought in local shows around Europe. He now resides in Sweden.

Pickett (20-5) will be making his UFC debut after going 3-1 in WEC. "One Punch" was scheduled to fight Miguel Torres at UFC 130 but an injury forced him out of the bout.

Barao (26-1, 1 NC) is riding a 26-fight winning streak. The Nova Uniao product went 2-0 in WEC and then beat Cole Escovedo in his UFC debut in May.

UFC 138, which will air via same-day tape delay in the United States on Spike TV, takes place at the LG Arena in Birmingham, England. The main event features Chris Leben vs. Mark Munoz in the UFC's first five-round non-title fight main event.