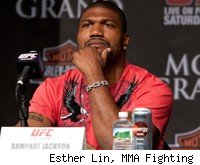 It was practically guaranteed that putting UFC light-heavyweight champion Jon Jones and challenger Quinton "Rampage" Jackson on the same podium would lead to some verbal jabs, a few laughs, and a candid admission or two.

We got all of the above from the UFC 135 headliners at a Tuesday press conference in Denver to announce their upcoming title match.

Though the two were largely civil to each other and shared a handshake at the conclusion of the afternoon, that didn't stop them from a couple of verbal exchanges that livened up the proceedings and set a competitive tone for an emerging rivalry despite the fact that their fight is more than two months away.

Among the most interesting sparring sessions came midway through, when a reporter asked Jackson if he thought Jones would look to take the fight to the ground.

"You know he is," he said. "Come on, man. Who's been standing with me, dog? Who's been actually doing mixed martial arts with me? Everybody's been wrestling me. You already know, player. "

"I think I displayed pretty good kickboxing against Mauricio "Shogun [Rua]," he said. "And Shogun was throwing knees and elbows and high kicks and things. Rampage is like fighting a boxer in my opinion. If he thinks that I'm intimidated to stand with him, I think it's great he's under that impression."

Then Jackson stepped in again, and we'll go from there...

Jackson: "I just have to say, straight up, I respect you dog. I do think you are the future of MMA, straight-up. I'm keeping it real. But you fought Shogun when he was rusty as hell. He hadn't fought for a year. He had like two knee surgeries."

Jackson: "You're right. There's always excuses. A hundred of them. I have like three of them for every time I lost, I'm not going to lie."

Jones: "Are you thinking of anything good now?"

The fight, which takes place on September 24, will mark the first time in UFC history that two African-American fighters compete for a UFC championship. But it's also a bout seen by many as a battle between generations. Jackson, though just 33 years old, has been in the fight game for well over a decade, while the 24-year-old Jones is seen by many -- Rampage included, it seems -- as the sport's future superstar.

Even that storyline, though, brought a bit of back and forth from the pair, when a reporter asked if Jackson felt he needed to "teach this kid a lesson."

"Who you calling a kid, buddy?" Jones asked with a smile.

"Who you calling old, dog?" Jackson then said to a laugh. "I'm only 33. Goodness. You all act like I'm Randy Couture's decrepit old ass.

"You know, if I have to represent the old school, I guess I'll represent them," he continued. "You put me in that category. I was younger than him when I started. I was 21, 22 fighting Wanderlei [Silva] and stuff like that. I guess I'm old school, but with old school comes a lot of experience. He's the youngest champion, but I think he's the least experienced champion in UFC history. All that other stuff don't matter to me. I just come to fight and get my belt back. That's the only thing I care about. I got tunnel vision. I don't care about nothing else."

"I think Brock Lesnar might have been the least experienced champion," Jones responded. "Fighting Rampage is an honor. He's been around a long time. I've been watching him since high school or college. I respect his character and what he does for the sport. It's an opportunity for me to elevate. When you beat people who accomplish so much, you take a little bit of their thunder and accolades. That's what I did with Shogun, and that what I'd like to do with Rampage."

Neither fighter was very specific about what they expect from the fight, other than Jackson saying he envisions Jones "getting destroyed," and Jones saying he believes he's improved a lot since defeating Rua in March.

Jackson said he believes all the pressure is on Jones to defend the belt, and that he's motivated to take back the title which he last held in 2008.

"Him and Rashad got something in common," Jackson said. "They're both really cocky. I'm confident, very confident in myself. There's a difference. Last time I was this confident, I knocked someone [Chuck Liddell] out in the first round and got that belt. I've been working hard, training and doing all the right things, all the stuff I need to be doing. That belt's coming back to me, for real."

For once, Jones didn't respond. His answer, we assume, will be ready on September 24.