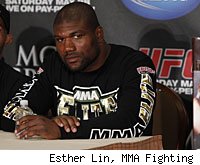 UFC 135 takes place on Saturday, September 24, at the Pepsi Center in Denver. In addition to Jones vs. Jackson, fights on the card include Matt Hughes vs. Diego Sanchez, Ben Rothwell vs. Mark Hunt, Damacio Page vs. Kid Yamamoto, Travis Browne vs. Rob Broughton, Takanori Gomi vs. Nate Diaz, Tony Ferguson vs. Aaron Riley and James Te-Huna vs. Ricardo Romero.

The press conference starts at noon ET and the video is below.