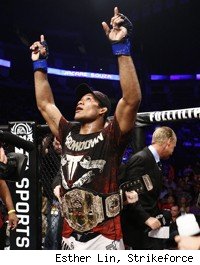 This will undoubtedly mark the biggest fight of Rockhold's career, as the American Kickboxing Academy member has never fought on the main card of a major Strikeforce event before nor for a title. The 7-1 fighter has battled a series of injuries, which have kept him out of action since February 2010.

Light heavyweights Roger Gracie (4-0) and Muhammed Lawal (7-1) have also agreed to meet on Sept. 10. The 205-pounders were supposed to meet on July 30, but an injury suffered in training forced Gracie to pull out of the fight. Lawal hasn't competed since losing the light heavyweight title to Rafael "Feijao" Cavalcante last August.

Also signed for the card is a lightweight bout between for Strikeforce champion Josh Thomson and newcomer Maximo Blanco, plus Canadian prospect Jordan Mein will make his debut against veteran Evanglista "Cyborg" Santos.

In addition to those fights, the semi-finals of the heavyweight grand prix is expected to take place on that date, with Daniel Cormier facing Antonio Silva on one side of the bracket and Josh Barnett vs. Sergei Kharitonov on the other.

No location has been announced for the event, which will air on Showtime.