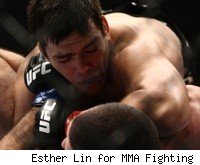 As if Zuffa executives didn't have enough headaches with the injury bug that has wreaked havoc on cards for months, there have also been a pair of high-profile flare-ups with major Zuffa stars within the last week.

The first one came when UFC president Dana White revealed that Lyoto Machida had accepted a fight with Rashad Evans at UFC 133, but then changed his mind and demanded "Anderson SIlva-money." The second came when Strikeforce heavyweight champion Alistair Overeem seemingly dared the powers that be to pull him from the Heavyweight Grand Prix after he claimed they threatened him with withdrawal from it if he couldn't fight on the desired Sept. 10 date.

While the two reports gained heavy traction with fans and media over the last several days, White seemed to indicate during a Tuesday press conference that he expects both situations to be resolved.

The Overeem situation was the more recent of the pair. On Monday's edition of The MMA Hour, Overeem said he was being pressured to fight in September, even after informing his employers that he would not be ready after taking a vacation and nursing fight-related injuries.

"I'm really not going to sing their tune," he said then.

Tuesday, White gave the UFC's side of the story, and how it will affect Overeem's future.

"If you say you're hurt, you're hurt," he continued. "What are you gonna do? There's been a lot of that lately. If I got mad at guys who got hurt, I'd be really pissed off right now. It is what it is."

As for Machida, the former UFC light-heavyweight champ seemed to anger White when his camp asked for a healthy raise for a short-notice match with Evans. A few days later, White's blood-pressure seemed back to normal when discussing him.

"Things are going to work out with Machida," he said.