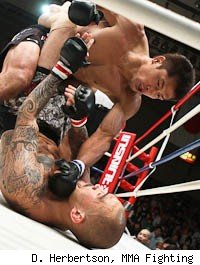 In the co-main event, Shooto bantamweight (123 lbs) champion Yasuhiro Urushitani successfully avenged a 2008 upset submission loss to Yuki Shojo by way of a crushing head kick, stopping the challenger only 24-seconds into round two.

Also featuring on one of the best events of the year in Japan, former Shooto featherweight (132 lbs) ace Masakatsu Ueda devastated Japanese legend Rumina Sato with a first-round kick to the liver, sending Sato down to all fours and leaving him writhing in pain.

Hironaka's wrestling was simply too much for Boku as he effortlessly took the striker down and controlled him through the three round bout. In the last minute of the last round, Boku did manage to make it to his feet and chase Hironaka in search of the come from behind knockout, but it was not to be and with a point deducted from Boku for an illegal up-kick in the second round, the judges had no issues awarding Hironaka the belt.

In their first meeting in 2008, Yasuhiro Urushitani was using his counter striking, knees and footwork to cruise to a dominating victory over Yuki Shojo, but a shocking last-round guillotine choke handed the future Shooto 123-pound world champion his first and only loss inside the distance.

Urushitani made up for that loss on Monday night in emphatic fashion, again dominating Shojo through the first round with blistering right hands before punctuating it with a second round shin-to-the-face head kick knockout.

Since the loss to Shojo in 2008, Urushitani has cruised past every opponent and in his last two outings has found the ability to finish fights in dramatic fashion. After the fight, Urushitani expressed interest in the UFC's planned 125-pound division and called out Demetrious Johnson, stating that he believes he would be good enough best the pint-sized wrestler and stop his takedowns.

The meeting between two of Shooto's best grapplers turned out a striking battle - Ueda looked to jab and batter the legs and ribs of his opponent while Sato was sought victory with his right hand. Ueda, who works his Muay Thai with former Shooto flyweight ace Rambaa Somdet, got the better of the exchanges though and weaved a cracking kick through the guard of Sato and sent him to the canvas on hands and knees, grimacing in pain.

Former Shooto lightweight ace Akitoshi Tamura chose an questionable gameplan in his meeting with the flamboyant Tetsu "Hadairo" Suzuki and paid the price, tapping out to a third-round reverse triangle.

Tamura, who certainly has better striking than his opponent, attempted from the opening bell to out-grapple the grappler and aggressively seek the submission from rubber guard. It looked as though Tamura's plan may have worked when he secured a third-round omo-plata but Suzuki's counter was superb – stepping over Tamura's head and slapping on the reverse triangle for the submission.

2008 Shooto 154-pound rookie champion Ikuo Usuda, formerly one of the hottest prospects in Japanese MMA, made an unsuccessful return to the ring when he suffered his second consecutive loss, this time at the hands of Wajutsu Keishukai RJW's Wataru Miki. Miki's solid jab turned the bout in his favor and shook the Kiguchi Dojo prospect, leading him to give up an easy rear-naked choke off a failed takedown attempt midway through the last round.

2010 Shooto rookie tournament MVP Kyoji Horiguchi and slugger Yuta Nezu threw caution to the wind in search of the knockout in a stunning one round war. Nezu's chopping low kicks and head-hunting hooks set the tone early and Krazy Bee's Horiguchi was only too happy to oblige, returning fire and darting in and out of the pocket. Horiguchi found his range early and a hook midway through the first stanza nailed Nezu on the jaw and left him hanging unconscious on the ropes. In a scary scene, Nezu had to be stretchered from the ring some minutes later.

Kyoji Horiguchi moves to 5-0 with four knockout victories, cementing his status as one of the premiere prospects in Japan.

Gutsman Shooto Dojo's Masato Sannai made short work of Shooting Gym Osaka's Teruyuki Matsumoto, knocking out his stouter foe with a hook only 38 seconds into their 132 lbs bout.

The evening's opener, 2010 143-pound rookie champion Yuta Sasaki squeaked by Kosuke Kindaichi, earning a majority decision. Kindaichi's clinch troubled Sasaki but a second round takedown gave him the edge he needed to win the judge's favor.