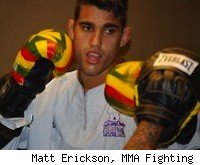 Kendall Grove looks like he has a new home, and a new opponent.

The longtime UFC fighter, released after his second straight loss in the octagon, is close to finishing a deal to join the returning ProElite promotion, and is likely to face Joe Riggs in his return.

The news was passed along by ProElite vice president of fight operations T. Jay Thompson, who shared it on Monday's edition of The MMA Hour.

Grove (12-9, 1 no contest), had a five-year stretch in the UFC, going 7-6 in 13 fights under the promotion's banner. His run in the octagon was highlighted by wins over former middleweight champion Evan Tanner, as well as Alan Belcher and Goran Reljic.

The Hawaiian seems a natural fit for ProElite's return to event promotion, which will take place at Blaisdell Arena in Honolulu on August 27.

His opponent is most likely to be Riggs, also a former UFC competitor and a veteran of nearly 50 pro fights. He's 34-13 with one contest in his career. Thompson announced Riggs' signing on the show.

If the fight takes place, it will be a rematch of a May 2004 fight in Hawaii, which Riggs won via first round KO.