Alistair Overeem Wants to Fight a Klitschko: 'If the Fans Want It, I'm In' 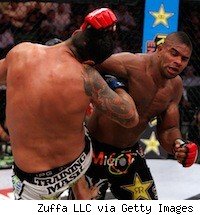 Alistair Overeem is always looking for a fight. Whether it's in mixed martial arts, where he is the reigning Strikeforce heavyweight champion, kickboxing, where he won the 2010 K-1 Grand Prix, and now, boxing, perhaps the next focus of his attention. But Overeem isn't just looking for a payday, he's looking to fight the best.

Recently, the Dutch powerhouse told a Polish news site that after the Strikeforce Grand Prix, he hopes to either face the UFC champ or box one of the Klitschko brothers. Older brother Vitali is the current WBC heavyweight champion while Wladimir is WBA, IBF, IBO, WBO and Ring Magazine world champion.

Overeem will appear on Monday's edition of The MMA Hour at 1 pm ET to further discuss his hopes of boxing either of the Klitschkos, but prior to that, he released a statement to MMA Fighting regarding his desires. The full text is after the jump.

"I would love to fight one of the Klitschko brothers. I think it will be great to see how one combat sport world champion will do against another world champion. There are many reasons to challenge him: boxing has been the No. 1 combat sport for years and MMA is growing and closing the gap with boxing. I would like to bring both worlds together by being the first MMA and K-1 champion to cross over into boxing.

There are many boxers that have competed in K-1 or MMA but vice versa, it's something that has not been done yet, so why not? I always like to challenge myself. I like to try new things. I know that a lot of people will call me crazy and will think that a boxing champion will have the full advantage. I'm fully aware that I'm the underdog going into the fight, but that was the same thing when I fought K-1 champion Badr Hari. People thought I was foolish to even try to fight such a name as an MMA fighter, but I took the chance and I defeated him. Two years later, I was crowned the K-1 champion.

If you don't try, then you will never know. Nobody has ever seen two combat champions fight in a boxing match so I think that I have the credentials to try. My current contract allows me to fight another sport so now I can do it. The last reason I can think of is that I know that Klitschko doesn't have many challenges in boxing anymore. The heavyweight division isn't very interesting anymore, so maybe I can give some color to the division and make for an exciting fight. If I look at the David Haye vs Wladimir Klitschko fight, I was a little disappointed. Klitschko was much better. No disrespect to Haye, but I truly believe I can make a more exciting fight, win or lose. As a true fan of MMA, I always liked the concept to see different combat sports fighting it out, so I'm going to make a bold statement and challenge Klitschko under his rules and his terms. I'm not in any way trying to disrespect him by challenging him, but he and I know this fight will not go to a decision!

It's up to the fans' response. I only want to fight him if there is support in both boxing and MMA communities. If the fans want it, I'm in!"