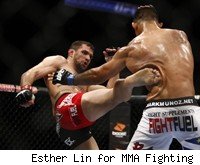 A pair of wrestling standouts will square off when the UFC returns to Houston in October.

Aaron Simpson and Nick Catone, each riding two-fight winning streaks and each decorated collegiate wrestlers, have agreed to a middleweight fight at UFC 136. The UFC made the announcement on its Twitter feed late Monday night.

Last week, the UFC began adding in earnest fights to the card, which features lightweight and featherweight title fights in the main and co-main events. Simpson-Catone likely will be part of the pay-per-view's preliminary card.

Simpson (9-2, 5-2 UFC) has won back-to-back unanimous decisions over Mario Miranda in March and Brad Tavares at UFC 132 earlier this month. Simpson had been scheduled to fight Jason "Mayhem" Miller at the event, but Miller was given a coaching slot on the forthcoming fall season of "The Ultimate Fighter" instead.

Simpson was a standout wrestler at Arizona State University, twice earning All-American honors. He also spent nearly a decade there as an assistant coach. After starting his career with six straight knockout or TKO victories, his last three wins have all been by decision. After a two-fight skid with losses to Chris Leben and Mark Munoz in 2010, Simpson has rebounded in 2011 and will look to make it three straight.

Catone (9-2, 3-2 UFC) is coming off a unanimous decision win over Constantinos Philippou at UFC 128 in March, his first fight in 14 months after being out with various injuries. Catone's two losses came in 2009 to Tim Credeur and Munoz. He wrestled collegiately at Rider University.

UFC 136, which takes place Oct. 8 in Houston, will be preceded by the latest UFC Fan Expo. The card features the long-awaited lightweight title trilogy rematch between champion Frankie Edgar and Gray Maynard, who fought to a draw in January. The co-main event is a featherweight title fight between champion Jose Aldo and Kenny Florian. Also on the card, Chael Sonnen returns for the first time since his UFC 117 loss to Anderson Silva and subsequent suspension to face surging middleweight Brian Stann.