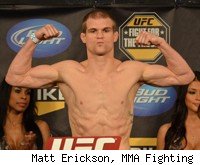 Looking to avoid a three-fight losing streak, Evan Dunham will return in September for a lightweight fight against Shamar Bailey.

The UFC announced the bout for Fight Night 25 on its official Twitter account overnight. Fight Night 25 will take place Sept. 17 in New Orleans, with the main card airing live on Spike TV.

In addition, the UFC recently made official a featherweight bout for the event between Mackens Semerzier and Mike Lullo.

Dunham (11-2, 4-2 UFC) saw his current two-fight skid start with a silver lining of sorts. At UFC 119 last September, he dropped a split decision to Sean Sherk – a decision most fans disagreed with. But more importantly, UFC president Dana White disagreed with the judges and said the promotion would not treat Dunham's first career loss as a loss, at least in terms of how it pushed him forward in the 155-pound division.

But at the UFC's Fight for the Troops 2 show at Fort Hood, Texas, in January, Dunham ran into a red-hot Melvin Guillard, who blitzed through the Oregon native for a quick first-round Knockout of the Night victory. Dunham, whose training home is at Xtreme Couture in Las Vegas, had been scheduled to return to action at UFC 132 earlier this month, but an injury forced him off that card.

Bailey (12-3, 1-0 UFC) was arguably the favorite heading in to Season 13 of "The Ultimate Fighter" this past spring. He was the first pick by coach Junior dos Santos, but a unanimous decision loss to Chris Cope in the quarterfinals ended his hopes for a TUF title. At the TUF 13 Finale last month, he grinded out a unanimous decision win over Ryan McGillivray, his housemate and Team dos Santos teammate. Bailey, who also has fought for Strikeforce, going 1-1, and M-1 Challenge, lives in Indianapolis, where he frequently trains with fellow firefighter Chris Lytle.

Semerzier (6-3, 1-0 UFC) started his WEC career with one of the 2009's biggest upsets, a triangle choke of Brazilian jiu-jitsu ace Wagnney Fabiano at WEC 43. But after that, he dropped three straight WEC fights in the featherweight division. His Zuffa career was likely on the line against Alex Caceres at FIght Night 24 in March, and he got his UFC career started on a high note with a submission victory. The Virginia native has spent time training with former WEC bantamweight champion Miguel Torres in the past, but now makes his training home at former UFC and WEC fighter Jeff Curran's gym north of Chicago.

Against Lullo (8-3, 0-1 UFC), Semerzier will face an opponent who trains not far from him, and who is a veteran of Curran's XFO promotion. Lullo, a Chicago-area native, works at Midwest Training Center, one of the former homes of UFC lightweight contender Clay Guida. Lullo will be fighting for the first time in 10 months. He made his UFC debut with a short-notice fight at UFC 123 against Edson Barboza, whose brutal leg kicks continually took Lullo's lead leg out from under him to the point he could barely stand, leading to a TKO victory. That fight snapped Lullo's eight-bout winning streak after starting his career 0-2.

The UFC's first trip to New Orleans in the Zuffa era will take place Sept. 17 at the Ernest N. Morial Convention Center. The event will be a joint venture with major sponsor Bud Light and is expected to feature fan events and concert tie-ins to go along with its main-card Spike TV telecast.