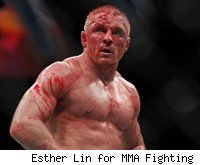 A Halloween weekend card already threatening to be scary-good got a little better with the UFC's recent announcement of a lightweight fight between Dennis Siver and Sam Stout.

The promotion announced that fight, plus a light heavyweight bout between Brandon Vera and Eliot Marshall, for its Oct. 29 UFC 137 card in Las Vegas.

UFC 137 already features a welterweight title fight between champion Georges St-Pierre and Strikeforce 170-pound champion Nick Diaz, who will vacate his belt in that promotion to challenge GSP for his title. It is the first UFC-Strikeforce crossover fight since Zuffa bought the UFC's biggest rival earlier this spring.

And in a fight that could determine the next challenge for the welterweight title, former lightweight champion BJ Penn will meet Carlos Condit. Also on the card are a pair of heavyweight tilts between unbeaten Matt Mitrione and Cheick Kongo and Mirko "Cro Cop" Filipovic and Roy Nelson.

Siver (19-7, 8-4 UFC) has won four straight fights and eight of his last nine – including a 7-1 stretch in his second stint in the UFC. He has four fight-night bonus awards over that period, as well. After upsetting George Sotiropoulos at UFC 127 in February, Siver earlier this month beat Matt Wiman at UFC 132 by unanimous decision. Though fans at the event, and throughout the online world, disputed Siver's win and chalked it up to more bad judging, UFC president Dana White said he scored the bout in Siver's favor.

Stout (17-6-1, 6-5 UFC) has been on a tear in the lightweight division, winning four of his last five. The Canadian's only loss since 2008 was a split decision setback to Jeremy Stephens at UFC 113. Last month, his brutal knockout of Yves Edwards at UFC 131 earned him a Knockout of the Night bonus – his fourth bonus in his last five fights and sixth overall – including five Fight of the Night awards. Despite his "Hands of Stone" nickname, Stout's KO of Edwards was his first knockout, and first finish, since 2007.

Vera (11-5, 1 NC, 7-5, 1 NC UFC) returns to the cage in what could very well be a critical fight for his career. After losses to Randy Couture and Jon Jones, Vera was dominated by Thiago Silva at UFC 125 in January and was subsequently cut. But Silva's positive test for performance-enhancing drugs overturned the loss to a no contest, and Vera was given another shot in the UFC. "The Truth," a former heavyweight, started his career 8-0, and 4-0 in the UFC, including a win over former champion Frank Mir. But since, he has gone just 3-5 with the one no contest.

Marshall (10-3, 3-2 UFC) gets one more crack after a TKO loss to Luiz Cane at UFC 128 in March. He took that fight on five weeks notice, subbing for an injured Karlos Vemola. It was his return to the promotion after going 3-0 outside the UFC in 2010. After a split decision loss to Vladimir Matyushenko in March 2010, Marshall, a Season 8 veteran of "The Ultimate Fighter," was bizarrely cut by the UFC despite being 3-1 in the promotion at the time.

The UFC 137 pay-per-view will take place at the Mandalay Bay Events Center in Las Vegas. The UFC last visited that venue for UFC 126 in February. With the event, Mandalay Bay will pull into the lead against its down-the-street sister property, the MGM Grand Garden Arena, for most UFC events hosted. Each has currently been home to 20 UFC shows. UFC 137 will be Mandalay Bay's 21st.