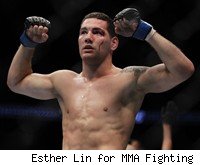 The UFC's recent all-out assault on fight announcements continued overnight with a middleweight bout for UFC 138.

Tom Lawlor will fight for the first time in what will be more than a year when he meets Chris Weidman.

UFC 138, though not yet officially announced by the promotion, is expected to take place at the HP Pavilion in San Jose, Calif. It will be the UFC's debut in San Jose, a city it previously has stayed away from. San Jose was the home base of Strikeforce, the UFC's one-time competitor that now falls under the Zuffa umbrella.

Weidman (6-0, 2-0 UFC) was a Division-I All-American wrestler at Hofstra University in his home state of New York. He transitioned to MMA, training under the tutelage of former UFC welterweight champion Matt Serra and coach Ray Longo at their Long Island gym, and success came quickly.

After going 4-0 for the New Jersey-based Ring of Combat promotion, including winning its middleweight belt, Weidman got a short-notice call to face Alessio Sakara at UFC on Versus 3 in March, filling in for Rafael Natal. He dominated for a 30-27 sweep of the scorecards. Last month, his guillotine win over Jesse Bongfeldt at UFC 131 earned him Submission of the Night.

Lawlor (7-3, 1 NC, 3-2 UFC), a cast member of Season 8 of "The Ultimate Fighter," last fought at UFC 121 last October. His unanimous decision win at that event over TUF 4 vet Patrick Cote was Cote's third straight loss and sent him packing from the UFC. That win snapped a two-fight skid for Lawlor, who had previously lost to Aaron Simpson and Joe Doerksen in 2010.

UFC 138 is expected to feature a main event heavyweight title fight between champion Cain Velasquez and top contender Junior dos Santos. Velasquez's training home is at the San Jose-based American Kickboxing Academy. He has been out of action since winning the title against Brock Lesnar at UFC 121. dos Santos dominated Shane Carwin at UFC 131 to remain the No. 1 contender for the belt.