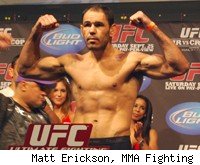 The game of musical chairs that has become UFC 133 continued late Saturday night.

Antonio Rogerio Nogueira has been forced out of his fight with Rich Franklin. UFC president Dana White announced the news about "Little Nog" on Twitter late Saturday night and said the UFC was working on a replacement to face Franklin.

According to the Brazilian website Tatame, a shoulder injury in training is what has Nogueira (19-5, 2-2 UFC) shut down.

Earlier this week, Phil Davis had to bow out of his main event fight against Rashad Evans. Tito Ortiz turned down the chance to fill in on short notice, and Lyoto Machida did the same. Ortiz then reconsidered and took the fight. And Davis was only in the fight to begin with because light heavyweight champion Jon Jones pulled out of a planned first title defense against Evans.

Also this week, Vladimir Matyushenko pulled out of his fight with Alexander Gustafsson and was replaced by Matt Hamill. The event has also seen several other changes on the preliminary card.

Franklin (28-6, 1 NC, 13-5 UFC) will now await a possible new opponent for the Aug. 6 card, which will take place in Philadelphia. Franklin is 2-3 in his last five fights, but they all have come against fellow legends of the sport. He has suffered losses to Dan Henderson, Vitor Belfort and Forrest Griffin. But his two wins, against Wanderlei Silva and Chuck Liddell, have both won fight night bonus awards.

Nogueira would have been trying to end a two-fight skid after unanimous decision losses to Ryan Bader at UFC 119 and Davis earlier this year at Fight Night 24's main event. At UFC 114, Nogueira beat Jason Brilz by split decision in what many considered to be one of the year's biggest robberies.

UFC 133 now includes a rematch between Evans and Ortiz, Franklin against an unknown opponent and Vitor Belfort vs. Yoshihiro Akiyama. The main card airs live on pay-per-view at 9 p.m. Eastern and will be preceded by a pair of fights on Spike TV at 8 p.m.