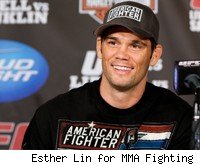 UFC 133 has become one of the more injury-riddled cards in recent memory.

Antonio Rogerio Nogueira had to pull out with an injury, which the UFC announced Saturday. And that will now mean his opponent, Rich Franklin, will be off the card altogether. The UFC made the announcement Sunday afternoon.

Nogueira-Franklin was scheduled to be the co-main event of the Aug. 6 show in Philadelphia. But with apparently no opponent available to fight Franklin on three weeks notice, the UFC was forced to scratch the former middleweight champion, as well. In its place, a middleweight fight between Vitor Belfort and Yoshihiro Akiyama has moved up a spot on the card to co-main status.

With a spot open on the main card, the UFC said a welterweight fight between Dennis Hallman and Brian Ebersole, who have 129 career professional fights between them, will be moved to the televised pay-per-view.

The original main event of UFC 133, the promotion's first trip to Philadelphia since UFC 101, was to be Jon Jones' first light heavyweight title defense, and it was to come against former friend and training partner Rashad Evans. But Jones pulled out soon after the fight was announced, expecting to need hand surgery.

Evans took a fight with Phil Davis on the card. Jones subsequently elected to pass on the surgery and took a fight with Quinton "Rampage" Jackson in September. Last week, Davis pulled out of his fight with Evans with an injury and was replaced by the suddenly relevant again Tito Ortiz.

Also last week, Vladimir Matyushenko pulled out of a light heavyweight fight against Alexander Gustafsson and was replaced by Matt Hamill.

UFC 133 will take place at the Wells Fargo Center. Aside from the pay-per-view, which starts at 9 p.m. Eastern on Aug. 6, there will be a pair of fights on Spike TV starting at 8 p.m. Eastern – Hamill-Gustafsson and Mendes-Rani Yahya. And once again, for the seventh straight event, the unaired prelims will be streamed live on Facebook.