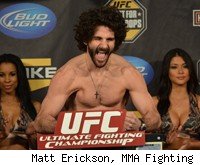 The UFC will fulfill its four-event deal with the Versus cable station in October with UFC on Versus 6.

The promotion made the announcement Saturday night, though the date and location for the event has not yet been announced. The UFC said that information will be released "in the coming weeks." But Heavy.com on Saturday reported the event will take place Oct. 1 in Washington, D.C.

And to get the card started, the promotion made a pair of fight announcements for the show at the same time. Welterweights Charlie Brenneman and Anthony Johnson will meet, and lightweights Mac Danzig and Matt Wiman will also fight in a long-awaited rematch.

Brenneman (14-2, 3-1 UFC) is coming off the biggest win of his career, a major upset of Rick Story in the co-main event of UFC on Versus 4 in Pittsburgh last month. Brenneman took the fight on short notice when Nate Marquardt was ruled out, and he took advantage with a unanimous decision win. Story was a more than 5-to-1 favorite.

Johnson (9-3, 6-3 UFC) was originally scheduled to face Marquardt last month, but had to pull out with an injury. Story filled in for him. Johnson has won four of his last five fights, but has fought just once since a November 2009 loss to Josh Koscheck. In March, he beat Dan Hardy by unanimous decision.

Danzig (20-8-1, 4-4 UFC), the Season 6 winner of "The Ultimate Fighter," returns for the first time since a December Knockout of the Night win over Joe Stevenson in Montreal. He was scheduled to face Donald Cerrone at UFC 131, but pulled out with an injury.

Wiman (13-6, 7-4 UFC) is coming off a unanimous decision loss to Dennis Siver at UFC 132 earlier this month. After the decision was announced – 29-28 on all three judges' cards for Siver – Wiman stormed out of the cage. The loss ended a three-fight winning streak for the three-time Fight of the Night bonus winner, including his controversial win over Danzig at UFC 115.

At UFC 115 in Vancouver in June 2010, Wiman caught Danzig in a guillotine. Referee Yves Lavigne, believing Danzig was out, stopped the fight – but Danzig popped up immediately to protest, clearly not out. Danzig explained to Joe Rogan after the fight that he wasn't out, but didn't hold any ill will toward Lavigne. The two were scheduled to rematch at UFC Fight Night 22, but a Danzig injury forced him out. Wiman was later forced off the same card with an injury.

UFC on Versus 6 will be the promotion's fourth event on the cable station in 2011. The two previous "UFC Live" cards this year have been in Louisville and Pittsburgh. Next month, UFC on Versus 5 takes place in Milwaukee. Like all three of those cities, the UFC will be making its debut in Washington, the nation's capital.