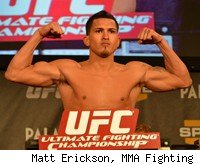 The Houston hits just keep on coming. A bout between final WEC lightweight champion Anthony Pettis and Jeremy Stephens has been added to UFC 136.

The UFC announced the matchup Saturday for its Oct. 8 card, which will take place in Houston, coinciding with a UFC Fan Expo on Oct. 7-8.

The fight is the latest in a slew of recent fight announcements the UFC has made for the show, which will be its second trip to the nation's fourth largest city. The UFC last visited Houston for UFC 69 in April 2007.

Pettis (13-2, 0-1 UFC) will be looking to rebound after some bad luck, followed by the end of a four-fight winning streak. Pettis, as the last WEC lightweight champ following that promotion's merger with the UFC, was expected to face the winner of the Jan. 1 fight between champion Frankie Edgar and Gray Maynard. When that fight ended in a draw, a rematch was ordered (one that will, coincidentally, happen at UFC 136 in the main event) – and Pettis was left in the cold. He took a fight with Clay Guida at the Season 13 Finale of "The Ultimate Fighter," and was outwrestled en route to a 30-27 sweep on the judges' scorecards for Guida.

Prior to that fight, Pettis went 4-0 in 2010, including his win over Ben Henderson to claim the WEC title at the promotion's swan song event in December. That fight included his now-famous flying kick off the cage in the fifth round – "the kick heard 'round the world." Three of his four wins in 2010 won fight-night bonus awards.

Stephens (20-6, 7-5 UFC) has started to surge upward in the lightweight division in 2011 with a Knockout of the Night win over Marcus Davis at UFC 125 and a unanimous decision win over Danny Downes at the TUF 13 Finale in June. Last September, he lost a close split decision to Melvin Guillard at UFC 119, his only loss in the last two years.

Stephens, an Iowa native, has four UFC fight-night bonuses in his career. Against Pettis, he will be facing his second consecutive Duke Roufus-trained fighter. Downes also is a product of the Roufusport school in Milwaukee.

UFC 136 features the main-event lightweight title trilogy rematch between Edgar and Maynard, plus a co-main event featherweight title fight between champion Jose Aldo and new featherweight Kenny Florian. In addition, the card features middleweight clashes between Chael Sonnen and Brian Stann and Demian Maia-Jorge Santiago, plus a lightweight bout between Guillard and Joe Lauzon. The star power already on the card means the Pettis-Stephens fight is likely to end up on the preliminary card.