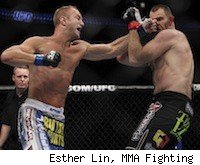 The UFC matchmaking machine continues to fire off new pairings for its packed upcoming schedule, announcing a pair of bouts for October's UFC 136 event.

In just the last few hours, the promotion confirmed heavyweight and featherweight bouts for the card.

Fresh off his UFC debut win in a Fight of the Night performance at UFC 131, Dave Herman has agreed to take on Mike Russow.

Herman (21-2) fought a back-and-forth battle with Jon Olav Einemo on June 11, finally winning via second-round TKO. Meanwhile, Russow successfully returned from a 10-month layoff at a March Fight Night event, earning a second-round TKO stoppage against Jon Madsen. That win improved his record to 14-1 with one no contest. It was also Russow's 10th straight victory.

At one point, the 22-year-old Grispi was designated the next contender to face Jose Aldo for the division's championship, but that match never happened, and now Grispi has lost two straight, falling to Dustin Poirier in a decision and more recently to George Roop via TKO. Now 14-3, he may well be fighting for his UFC career against Grice.

Grice recently began his second tenure in the UFC by moving down to featherweight and facing Ricardo Lamas at June's UFC Live: Kongo vs. Barry event. He lost via first-round TKO, dropping his record to 13-4.

UFC 136 takes place on October 8 from the Toyota Center in Houston. A main event has yet to be announced, though a co-main event pitting Brian Stann against Chael Sonnen has already been agreed to.