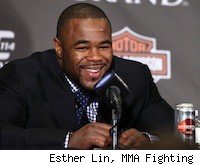 Time has changed Tito Ortiz, and the perceptions of him. For proof, look back to July 2007, around the time Ortiz was set to face Rashad Evans for the first time. In Dana White's words, Ortiz was "a complete and total moron." After the UFC 73 fight, judged a draw, White downgraded Ortiz's stock, saying, "Tito isn't that good anymore."

Evans was not a fan either. In the post-fight press conference following their heated bout, Evans and Ortiz exchanged barbs, with Evans ultimately telling Ortiz he beat him in the third round "like a little b----."

Fast forward four years, and Ortiz has suddenly become a highly paid underdog story, so much so, in fact, that Evans admitted to MMA Fighting that he was rooting for Ortiz to beat Ryan Bader during July 2's UFC 132. Yes, a once-bitter rival openly admitted rooting for the brash bad boy of MMA.

"I'm not going to lie, I was happy for him," Evans said. "I wanted to see him win. He hadn't won a fight in five years."

Evans then paused, perhaps thinking about how long a time that was, then he laughed.

"It was like, 'There you go!'" he continued. "I just wanted to see him win a fight. I hadn't seen him do it for so long. Sometimes, it's good just to be happy for somebody."

Still, Evans admitted that like most everyone else, Ortiz's win came as a shock to him.

"I don't think nobody was more surprised than Tito," said Evans (15-1-1). "Tito was over the moon about it, he was so surprised he won a fight."

By Wednesday, whatever good feelings Evans held for Ortiz had largely melted. In a 48-hour stretch beginning on Monday that he described as a "roller-coaster," Evans found out his scheduled opponent Phil Davis was out, was told Lyoto Machida had agreed to replace him, then informed Machida had backed out, and finally, that the UFC secured a replacement: Ortiz.

All along the way, they promised Evans they would find someone to face him, and he promised he would agree to face whoever they put in the slot. While Evans admits he would have liked the opportunity to "get some payback" on Machida, the only man to beat him, in his mind, it never mattered.

"I feel right now honestly, not to be disrespectful, but I don't think there's anybody who could beat me, so I didn't care who they put in front of me," he said.

Instead of a rising young star like Davis or a top contender like Machida, it is Ortiz, a 36-year-old just two weeks removed from his first win since October 2006. The fight with Evans was the second of his winless stretch. The two squared off in Sacramento in what was the first major fight of Evans' career, a major step up in competition level and spotlight.

Looking back, Evans admits he was nervous for the opportunity. Since then, of course, he's gone on to fight a series of high-profile names in major fights, rising as high as the division's champion in late 2008. Now 31 years old, Evans will face no such apprehensions this time around. In fact, he thinks the tables may have been turned in the intervening years.

"I've had a lot more experience since then," he said. "I've been in a lot of big fights, had a lot of success, and that says it all. For him, he's been on a rocky road. He's had to go down a path he never walked before. Losing all those times in a row, all that heartbreak, stuff like that. You never know how that hurts someone's mentality."

As far as the differences in their fight games, Evans sees little change in Ortiz. He says Ortiz was simply on his game against Bader, flashing ground skills he's long possessed. Evans felt some of them firsthand when he fought Ortiz four years ago, losing the first round before forcing a draw. At the time, it seemed a rematch was an inevitability, but contract issues froze Ortiz out for a while, and by the time he returned, Evans was on the way to passing him in the divisional rankings.

With that, Evans grew to believe the rematch would never happen.

"The challenge kind of got extinguished a little bit," he said. "He wasn't staying consistently hot. It was something I thought about back then, but as time went on, I thought about guys who would be more of a challenge. Coming off this win, it's looking like he's got a little fire underneath him. He's moving in the right direction, so right now is the perfect chance to fight him again.

"If he wants to fight, I appreciate him taking the fight, but I'm going to smash him," Evans continued. "I've been training so long, I just want to fight somebody."

While some have suggested Evans has nothing to gain in this matchup, UFC president Dana White confirmed on Thursday that Evans would earn a title shot with a victory. The gold at the end of the rainbow will be worn either by Jon Jones or Quinton Jackson, who square off at UFC 135 in October. Evans has history with both men; Jones was a former training camp teammate who he feels betrayed him, while he and Jackson engaged in a memorable feud that still lingers. He says he has no preference in who he meets next, though he thinks Jones, "a better fighter," will win.

A few months ago, Evans was the No. 1 contender, Jones was still his friend and Ortiz was nearing extinction as a fighter. A title fight? That is off in the future, and as Evans has learned, time has a funny way of changing things.