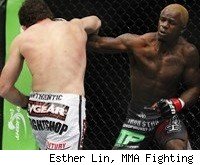 The breakneck pace of fight announcements for UFC 136 continues with another lightweight clash, this one matching surging contender Melvin Guillard against the always-exciting Joe Lauzon.

This is a fight both men have talked about in recent days, after Guillard said he would like to face Lauzon in his next fight.

The social-media savvy Lauzon made the announcement on his website.

Guillard has captured five straight wins, most recently knocking out Shane Roller in the first round of their UFC 132 fight. He's finished three of his last four opponents in improving to 29-8-2 with one no contest. He's been one of the hottest lighteweight in the UFC for a while now, taking eight of his last nine overall.

Because of a logjam at the top of the division, however, Guillard will have to bide his time against Lauzon, a frenetic fighter who has won nightly bonus awards in six of his last seven fights. Lauzon (20-6) has alternated wins and losses in his last five fights.

Lauzon's last bout came at UFC Live: Kongo vs. Barry, when he overwhelmed Curt Warburton, finishing with a kimura submission in 1:58.

UFC 136 takes place on October 8 from Houston. As first reported by MMA Fighting, a lightweight championship rematch between Frankie Edgar and Gray Maynard will headline the card.