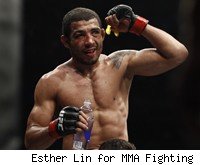 Someone at the UFC office must have marked July 15 as "Fight Announcement Day" on the calendar.

After several major fight bookings were announced on Friday, the promotion added one more big one for UFC 136 – a featherweight title fight between champion Jose Aldo and Kenny Florian. The UFC made the announcement on its official website.

UFC 136 will take place Oct. 8 in Houston, the UFC's second trip to the nation's fourth-largest city. The pay-per-view event will be headlined by a lightweight title trilogy rematch between champion Frankie Edgar and Gray Maynard, a fight booking first reported Friday by MMA Fighting.

Aldo (19-1, 1-0 UFC) will be defending his featherweight belt for the fourth time and second time as a UFC fighter after the WEC merged with the promotion at the start of this year. In April at UFC 129, Aldo beat Mark Hominick by unanimous decision to retain the title. In the WEC, after beating Mike Brown in November 2009 to win the belt, Aldo beat former champ Urijah Faber and Manny Gamburyan in title defenses.

Aldo had been set for a title defense against Chad Mendes at UFC 133 next month in Philadelphia. But because of various injuries, Aldo was forced to delay his return to the cage. Mendes elected to stay busy and took a fight with Rani Yahya on the same card – where a win would likely make him next in line after Florian.

Florian (15-5, 12-4 UFC) will fight for just the second time at featherweight after moving down from a five-year stint at lightweight. The 145-pound division is Florian's fourth weight class in the UFC. He began his career in the promotion at middleweight on Season 1 of "The Ultimate Fighter" before moving to welterweight for two fights, then a long run at 155 pounds that included two title challenges – losses to Sean Sherk and BJ Penn.

Last month at UFC 131, Florian made his featherweight debut, outpointing Diego Nunes by unanimous decision. After that fight, UFC president Dana White said Florian was likely next in line to challenge for Aldo's title.