Frankie Edgar, Gray Maynard Agree to Meet for a Third Time at UFC 136 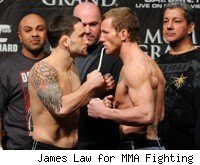 Frankie Edgar and Gray Maynard have verbally agreed to meet for a third time at UFC 136 in Houston, sources close to the event confirmed with MMA Fighting.

The long-awaited trilogy fight was supposed to take place at UFC 130 in May, but injuries suffered by both the champion Edgar and Maynard forced the UFC to delay the lightweight title fight.

Maynard handed Edgar the only loss of his career in April 2008. They met again in January, this time under different circumstances with Edgar as champion, but the UFC 125 rematch ended in a draw. That fight is considered by many to be the current front-runner for 2011 Fight of the Year.

UFC 136 is scheduled to take place on Oct. 8 at the Toyota Center in Houston, TX. The co-main event is expected to be Chael Sonnen vs. Brian Stann.