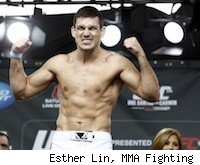 Brazilian UFC middleweights Demian Maia and Jorge Santiago have agreed to face off in October.

Maia confirmed the matchup to Brazilian news site Esporte.Ig.com, and though the UFC has yet to officially announce it, a source told MMA Fighting that the report is correct.

The meeting will come during the rapidly filling UFC 136 fight card in Houston's Toyota Center, and both fighters will be looking to bounce back from recent losses.

Maia (14-3) had a two-fight win streak snapped at June's UFC 131, losing via unanimous decision to Mark Munoz. Santiago, meanwhile, fell in his UFC debut in May, losing in a second-round TKO to Brian Stann.

Several additions to the UFC 136 card have been added over the last few days, including a heavyweight match between Dave Herman and Mike Russow and a featherweight bout with Josh Grispi and Matt Grice.

As of now, however, the event has no headlining act.