The Fallout From the UFC's Top 10 Canceled Fights of 2011 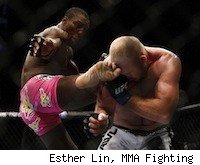 2011 has been a rough year for the UFC. TV ratings and pay-per-view buys are down amid a rash of injuries that have caused the main event to be changed on half of this year's fight cards.

The most recent such injury forced Phil Davis to pull out of his scheduled slot in the main event at UFC 133, and the new main event -- Rashad Evans vs. Tito Ortiz -- features two other fighters who have previously pulled out of main events in 2011.

We look at the fallout from this year's 10 biggest canceled fights below.

What We Missed: Aldo likely would have had a hot start to his UFC career and beaten up the overmatched Grispi, but he suffered a neck injury and pulled out of the fight.

Fallout: As it turned out, Aldo made his UFC debut against Mark Hominick at UFC 129, winning a great fight against a spirited opponent on the biggest UFC card of the year. Things worked out just fine for Aldo. The same can't be said for Grispi, however: Not only did he lose to Dustin Poirier at UFC 125, but he also lost his next fight, to George Roop. It'll be a long time before anyone is talking about Grispi in a title fight again.

What We Missed: The winner of this bout would have been viewed as near the front of the line in the heavyweight division, but Carwin pulled out with a back injury, while Nelson was pulled from the card as rumors swirled about his contractual status.

Fallout: Both Carwin and Nelson eventually got back into the Octagon, and both struggled: Carwin was beaten up by Junior dos Santos, while Nelson looked lethargic in a loss to Frank Mir. A Carwin-Nelson fight might still make sense, but it would now be a fight in which the loser would be in danger of getting cut, not a fight in which the winner would be near title contention.

Canceled Fight 3: Kenny Florian vs. Evan Dunham at UFC Fight for the Troops 2

What We Missed: Florian and Dunham were planning to meet in the main event on this card, but Florian had to pull out with a knee injury.

Fallout: Florian decided to use his long layoff to move down to featherweight, and it worked out well for him: He beat Diego Nunes in his featherweight debut and is now expected to take on Aldo for the featherweight title. Things didn't go as well for Dunham, however: Melvin Guillard replaced Florian in the main event and beat Dunham by first-round TKO. Guillard may have been the big winner in all this; he's having a great 2011, and this is where it got started.

What We Missed: Evans, the former light heavyweight champion, had earned a title shot by defeating Rampage Jackson in May of 2010. But after having to wait several months while Rua recovered from a knee injury, it was Evans who suffered a knee injury and had to pull out of this fight.

Fallout: Jon Jones replaced Evans on short notice, beat Rua and became the light heavyweight champion. Evans still hasn't fought and is waiting to find out who his next opponent will be.

What We Missed: Two aging light heavyweights both in need of a win were supposed to clash in the main event of a Spike TV card that likely would have drawn big ratings with Ortiz's name value. Instead, Ortiz suffered a cut over the eye and a concussion in training, and he had to pull out, with Phil Davis taking his place.

Fallout: Davis used his superior wrestling to win a 30-27, 30-27, 30-27 unanimous decision over Nogueira, setting himself up for what was supposed to be a big fight with Evans. Things didn't work out well for Nogueira, but everything has come up rosy for Ortiz, who beat Ryan Bader in his return to the Octagon at UFC 132 and now gets a shot at Evans, filling in for the injured Davis at UFC 133.

What We Missed: The Edgar-Maynard trilogy fight was one of the most-anticipated bouts of the year after their classic draw at UFC 125. Both Edgar and Maynard pulled out with injuries, and there's still no word on when we'll see them go at it.

Fallout: UFC 130, which initially looked like a great card, turned out to be a dud, with a non-competitive main event of Rampage Jackson vs. Matt Hamill (which was also a replacement for a canceled fight, as Hamill stepped in for the suspended Thiago Silva). The UFC's stacked lightweight division has turned into a bottleneck with Edgar and Maynard at the top and a long list of contenders waiting in line.

What We Missed: The showdown between this season's Ultimate Fighter coaches failed to materialize, as Lesnar had another bout with diverticulitis and had to pull out of his fight with dos Santos.

Fallout: Lesnar's replacement, Shane Carwin, was dominated by dos Santos, in a performance that set the Brazilian up as a clear No. 1 contender for Cain Velasquez's heavyweight title. But while the fight was a great showcase for dos Santos, Lesnar's absence cost the UFC several hundred thousand pay-per-view buys.

Canceled Fight 8: Anthony Johnson vs. Nate Marquardt at UFC on Versus 4

What We Missed: What we were supposed to get was a tough test for Marquardt in his first fight at welterweight. What we got was a mess when Johnson suffered a rotator cuff injury and Marquardt couldn't get cleared to fight.

Fallout: We've written thousands of words about the fallout around here, but the short version is that Marquardt has been kicked out of the UFC for bailing on the fight at the last minute, thanks to his use of supplemental testosterone without getting proper clearance.

What We Missed: Fitch and Penn battled to a draw at UFC 127, and this was supposed to be their opportunity to settle the score once and for all. Instead, both got hurt and had to sit out.

Fallout: UFC 132 was perhaps the most exciting event of the year, so few fans who bought this pay-per-view will complain about the cancelation of Fitch-Penn 2. Penn is slated to face Carlos Condit next, while Fitch is complaining that he can't get a fight.

What We Missed: Davis vs. Evans would have been an important fight in the UFC's light heavyweight division, with Davis an up-and-comer getting his biggest test to date and Evans being a win away from title contention.

Fallout: Tito Ortiz first turned down an opportunity to fight Evans on short notice, then relented and took the fight. Ortiz and Evans have now come full circle on the canceled fight front, having pulled out of main events themselves and now preparing to meet in a hastily arranged main event. It's been that kind of year for the UFC.