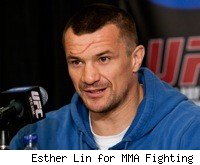 Popular UFC heavyweights Mirko Cro Cop and Roy Nelson have verbally agreed to meet at UFC 137 in October, the organization confirmed on Thursday.

Cro Cop broke the news that he would be fighting "Big Country" during a recent interview on the Croatian TV sports show, "Gol."

Cro Cop (27-9-2, 1 NC) has lost his last two fights in a row via knockout. There was some talk that the 36-year-old Croat would retire after his most recent loss to Brendan Schaub at UFC 128, but UFC president Dana White confirmed in May that the organization would honor the final fight on Cro Cop's contract.

"Do I think he should have retired? Yeah," White said. "But I don't think he's in one of these situations like Chuck Liddell, who needed to retire right then. He's a man, a grown man, and if he wants to continue to fight, that's his right. And he still has a fight with me."

Nelson (15-6) has also lost his last two fights in a row, most dropping a unanimous decision to Frank Mir at UFC 130. Following criticism from White and fans that he wasn't in shape to fight Mir, Nelson said on The MMA Hour that he was battling walking pneumonia leading up to the bout.

UFC 137, headlined by Georges St-Pierre vs. Nick Diaz for the UFC welterweight title, will take place Oct. 29 in Las Vegas.