Matt Hamill Steps In to Fight Alexander Gustafsson at UFC 133 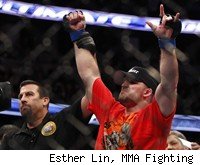 There's been yet another change to a light heavyweight fight on the August 6 UFC 133 card, as Matt Hamill is filling in for an injured Vladimir Matyushenko and will fight Alexander Gustafsson.

Hamill vs. Gustafsson is expected to be part of the two-fight Spike TV broadcast before the pay-per-view card.

The change comes a day after the UFC announced that Tito Ortiz had stepped in for an injured Phil Davis to fight Rashad Evans in the UFC 133 main event. UFC President Dana White said on Thursday that if Ortiz hadn't been able to fight Evans, he would have turned to Matyushenko next. But hours after White said that, the UFC announced on Twitter that Matyushenko isn't available for the UFC 133 card either.

For Hamill, he'll be taking the fight on short notice and making the quickest turnaround of his career, fighting just over two months after losing to Rampage Jackson in the main event at UFC 130 on May 28. He's getting a tough draw in Gustafsson, a 24-year-old Swede who's 11-1 in his career.

There's no word on the nature of Matyushenko's injury.