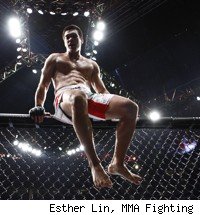 UFC President Dana White said on Thursday that the reason Tito Ortiz -- rather than Lyoto Machida -- is fighting Rashad Evans at UFC 133 is simple: Machida demanded a pay raise to take the fight, while Ortiz was willing to take the fight without renegotiating his contract first.

White sounded upset about his dealings with Machida, saying that Machida has been asking for a fight and initially agreed to take on Evans, but that his representatives later came back to White and told him Machida would only take the fight if he got a pay raise to pay him as much money as UFC middleweight champion Anderson Silva makes.

"Lyoto Machida has been terrorizing me for a long time for a fight and saying he wanted a fight," White said, adding that when he first proposed the Evans bout to Machida, "He accepted the fight."

But when White talked to Machida's management, he was told, "If you pay us Anderson Silva money we'll take this fight."

"Lots of crazy things happen in this business," White said. "Usually when stuff like that happens you know the guys it's going to happen with ... I did not expect that from Lyoto Machida."

Ortiz, however, was willing to fight Evans without any negotiation.

If Ortiz could do the unthinkable and follow his upset victory over Ryan Bader with an upset of Evans, White says Ortiz could be close to challenging for the light heavyweight belt, eight years after he lost that belt to Randy Couture.

"Tito is stepping up and he's taking a big fight on short notice, and I respect that," White said. "It would definitely put Tito in the mix. I wouldn't say he's necessarily the No. 1 contender after this fight, but he's Top 3."