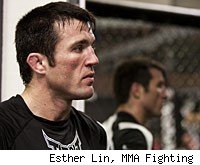 As UFC President Dana White scrambled to find a replacement to step in and fight Rashad Evans in the UFC 133 main event, he heard from two volunteers: Chael Sonnen and Chris Leben.

White said on Thursday that after Phil Davis dropped out of the fight with Evans, he got texts from both Sonnen and Leben asking if they could step in. But White never seriously considered putting either one of them in the cage with Evans, since Evans is a light heavyweight and Sonnen and Leben are middleweights.

"Both said they wanted the fight. I told them both they weigh 185 pounds but thanks for texting," White said.

White said that the fighter who ended up taking the Evans fight, Tito Ortiz, was the UFC's first choice to fill in for the UFC 133 main event, but that it took some time to get Ortiz to accept. The other fighter White contacted, Lyoto Machida, initially expressed interest but later said he wanted more money to take a fight on short notice.

Leben and Sonnen were the only two fighters who approached White about fighting Evans.

"That never crossed my mind," White said. "At 205 in Strikeforce, who would I grab who could come in and fight Rashad Evans?"