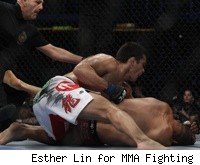 Multiple published reports from Brazilian news organizations suggest that UFC 133 headliner Rashad Evans is still without an opponent after Lyoto Machida declined the opportunity to fight at the Aug. 6 event on short notice.

Both Esporte and Clic RBS quoted Machida's wife Fabyola, who said that the former UFC light-heavyweight champion had decided against facing Evans with less than four weeks to prepare.

Unless Machida changes his mind, he'll be the second high-profile fighter to turn down the main event bout. Tito Ortiz also rejected a chance to step in for the injured Phil Davis.

Either fight would have been a rematch of a previous bout.

Ortiz and Evans fought at UFC 73 in July 2007, with the pair fighting to a draw. At the time, it was Evans' first step up to top-level competition. By the time he and Machida fought at UFC 98, he was the newly crowned champion. But Machida ended his reign before a successful title defense, knocking him out in the second round.

Because of his previous win over Machida, it was thought that he would be more likely to accept the fight, but it turns out that time worked against the possibility.

"He decided he would not be able to prepare in just three weeks," his wife Fabyola told Esporte. "It was very short notice and has a number of factors that need to be analyzed. So he decided he will not fight."

With that, the hunt for a replacement continues.