Rashad Evans Learns the Risks of Being Picky 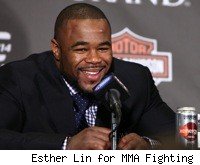 Two years ago I sat down with Rashad Evans and talked about, among other things, his decision to turn down a fight with Randy Couture. He wasn't shy about the fact that he was picky about taking the right fight, saying among other things:

Fans may not like any of that, but it's Evans' career and Evans' life, and if that's the way he chooses to do things, that's his right. But if Evans had known then what he knows now -- that he would fight only twice in the next year, that he wouldn't get a title shot despite winning those two fights, that he'd have a layoff of more than a year after his second fight and that he'd be sitting around in the summer of 2011 wondering who he was going to fight next -- I think he might have reconsidered how he approaches taking fights.

Let's review how all this has gone for Evans:

1. Sitting around and waiting has been Evans' m.o. since he beat Rampage Jackson at UFC 114 in May of 2010. That victory earned Evans a light heavyweight title shot, and Evans didn't want to fight again until he got his title shot. So when then-champion Shogun Rua was injured and unable to fight, Evans decided that he wouldn't fight again until Rua was ready.

The problem, of course, is that it was a long time before Rua was ready. And then when Rua was finally ready, Evans wasn't. And now it's more than a year later, and Evans is still not getting that title shot, and even the consolation prize -- a fight with Phil Davis -- has now been called off because Davis is hurt.

Think about how long it's been since Evans fought Jackson. The UFC has had 27 events since UFC 114. Jackson is far from the most active of UFC fighters, but he's already fought twice since then. Chuck Liddell has fought more recently than Evans. Jon Jones has gone from not even in the mix for a light heavyweight title fight to becoming the light heavyweight champion in the time since Evans last fought.

The MMA world changes fast, and fighters who refuse to fight find that the MMA world moves on without them.

2. Friends not fighting friends is one of the hot topics of debate in MMA, and UFC President Dana White has derided Evans as a guy who has too many friends. Eventually, Evans relented -- sort of. He said he wanted to fight Jones for the UFC light heavyweight title, but only after Jones had said he wanted the fight first, essentially declaring their friendship over. And then after agreeing to fight his "friend," Evans wasn't given the fight with Jones anyway.

3. Evans' No. 1 stated reason for declining to fight Randy Couture at UFC 105 in the fall of 2009 was that he didn't think it would do anything for him. At the time, Couture was a 46-year-old on a two-fight losing streak, and Evans figured he wouldn't move up in the light heavyweight rankings by beating a 46-year-old on a two-fight losing streak. And it's true: Beating Couture wouldn't have done a lot for Evans at the time. But what fighting Couture at the time would have done for Evans is actually get him in the Octagon. Evans has now learned the hard way that any fight is better than no fight.

4. When Shogun was finally ready to defend his title, it was Evans who got hurt and had to pull out. I'd never criticize a fighter for declining to take a fight if he's not healthy enough to do it. But it seems as though, in all the time he sat around waiting for Shogun to recover from his injury, Evans never calculated that he himself might get injured. It was Evans' injury that opened the door to Jones, and when Jones was offered a title fight against Shogun on short notice, he took it in an instant. Now he's the champion, and Evans is the one chasing Jones, and unsure who he'll have to beat to get to him.

5. Declining to take a fight on short notice is understandable: That's what Tito Ortiz did when Davis pulled out of the Evans fight, and that's what lots of fighters do. Evans only wants to fight an opponent he's fully prepared for. Except that with Davis out of the fight, Evans is going to have to take a change of opponents on short notice anyway.

And it appears that opponent will be Lyoto Machida, who brutally beat Evans the first time they fought. Evans will end up waiting 15 months for a fight he's probably going to lose.