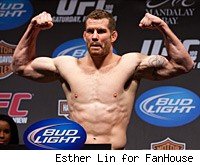 Nate Marquardt's road back to MMA stardom can officially begin.

The Pennsylvania State Athletic Commission lifted the former UFC fighter's suspension at noon ET on Wednesday because, according to Executive Director Greg Sirb, "he met all our medical requirements."

Sirb refused to go into detail as to what Marquardt had to do to meet the commission's requirements in order to get his suspension lifted.

MMA Junkie first reported the news earlier in the day.

Marquardt was not medically cleared to fight Rick Story at UFC Live on Versus 4 last month in Pittsburgh after a blood test administered on the day of the weigh-ins showed his testosterone levels to be outside the commission's accepted levels. Moments later, the UFC fired the former middleweight contender.

Marquardt discussed why his testosterone levels were high on a recent episode of The MMA Hour. For much more on the situation, click here.

According to Kelly Crigger, Vice President of Communications for Alchemist Management, the free agent Marquardt, one of Alchemist's top clients, is currently "talking to everybody."

"He absolutely he wants to fight again this year, for sure," Crigger said.

Crigger said that Marquardt had not yet decided where and at which weight he will fight next, but mentioned "The Great" had been approached by the likes of Bellator, DREAM and many other smaller promotions.

The 32-year-old Marquardt is currently 31-10-2 in his professional MMA career.